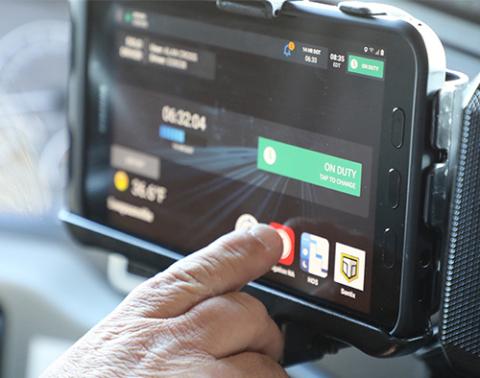 Walmart is providing drivers with a new tablet-based app.

The discount giant is implementing two technology tools that work together to enhance its driver experience and provide real-time visibility to the day-to-day operations of its network of more than 12,000 drivers.

In collaboration with Platform Science, a telematics infrastructure and transportation technology leader, every Walmart private fleet cab is now equipped with an intuitive, interactive tablet device that fully integrates with NTransit, a proprietary driver workflow application developed by Walmart.

By utilizing the Platform Science telematics infrastructure solution to deploy the NTransit app, Walmart provides near-real-time visibility of where its assets are within the fleet to ensure freight arrives on time and in the correct location. As a result, stores can better anticipate load arrival times and more effectively plan and schedule labor around truck deliveries.

As a result, Walmart intends to improve shelf stocking levels and provide customers with access to a more accurate inventory of products available for purchase online.

In addition, Walmart will leverage the new onboard technology to help drivers communicate more closely with stores by integrating with store applications, providing a more seamless delivery process. As the driver approaches a store, geolocation technology detects the driver’s location, sending push notifications to store associate handheld devices, allowing them to plan for a faster unload and turnaround. The retailer can also deploy secure audio messages directly with  drivers to ensure they receive important information while they are in the field.

By removing manual touchpoints, Walmart’s goal is to create a frictionless workflow so drivers can spend more time driving the truck and less time waiting at fulfillment centers or store deliveries. The new system is also designed to create accountability by allowing drivers to communicate what they accomplished on the road. That way, they are compensated for any miles and non-driving activities beyond what was initially planned.

According to Walmart, there has been a significant increase in driver satisfaction since it began implementing the new interactive tablets and app.

“We plan to continue improving and evolving our onboard systems based on feedback from our drivers and store associates so our supply chain associates can do their jobs with safety, courtesy and pride,” Scott Donahue, VP, Innovation and Automation Product, Walmart, said in a corporate blog post. “Walmart will continue to invest in disruptive technologies to take flight in today’s complex retail environment.”

Walmart faces truck driver shortage
According to data from the American Trucking Associations, the U.S. trucking industry is short 80,000 drivers, an all-time high.

The shortage existed pre-pandemic, as evidenced by efforts Walmart launched to hire more drivers in 2018 and 2019, but has grown worse since then. Truck drivers move 71% of the U.S. economy's goods.

And American Trucking Associations projections for the next few years don’t offer much hope, either. Based on driver demographic trends, including gender and age, as well as expected freight growth the shortage could surpass 160,000 drivers in 2030.

In response, Walmart is raising the average starting salary for first-year drivers in its private fleet from around $88,000 to a range of $95,000 to $110,000, which the company says is nearly double the average long-haul driver salary. Drivers who have been with Walmart longer can earn more, based on factors like tenure and location.

In addition, the company is launching a new program to attract new drivers. Known as the Walmart Private Fleet Development Program, the 12-week course enables the retailer’s supply chain associates in the Dallas and Dover, Del. areas to earn their commercial driver’s license (CDL) and became full-fledged Walmart drivers.

In addition to aggressively recruiting new drivers, including from its own employee base, Walmart has also been actively utilizing driverless trucks in its supply chain. In November 2021, became the first company to use autonomous delivery trucks with no safety driver in the “middle mile” of its supply chain.

The discount giant is using multi-temperature autonomous box trucks from Gatik to move online grocery orders from a fulfillment-only dark store to a nearby Walmart Neighborhood Market store in its headquarters city of Bentonville, Ark. Walmart is making the autonomous deliveries without having a human safety driver in the truck.