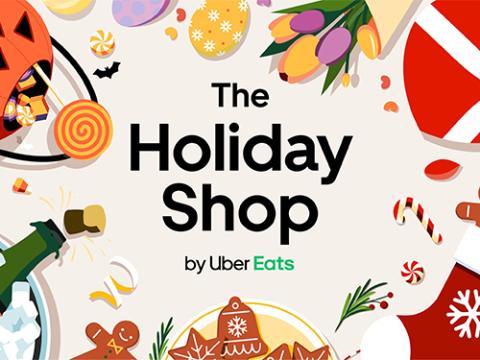 The Uber Eats Holiday Shop is an example of Uber’s shift toward e-commerce.

Uber Technologies Inc. is making moves that take it beyond being a traditional online delivery provider.

The company, which initially expanded from its core rideshare business into third-party online delivery with the launch of Uber Eats in August 2014, seems to be evolving its delivery service into an e-commerce platform. This is hardly unprecedented in the space, as evidenced by offerings such as DoorDash DashMart and Instacart Dollar Store Hub.

“Our goal is to make Uber a destination that customers can rely on to get whatever they need when they need it,” Raj Beri, Uber global head of grocery and new verticals, said in December 2021. A review of a few of Uber’s more interesting and innovative offerings reveals the company just might be “super pumped” to expand its mission even further.

One-stop holiday shop
In December 2021, Uber launched what it calls a “one-stop shop” for holiday consumers. Following up the September 2021 opening of its seasonally-themed online store, The Holiday Shop, the company began offering a “holiday hub” on the Uber Eats on-demand delivery platform.

The hub will expand and rotate seasonally throughout 2022 and beyond to accommodate various holidays. It also served as home to the Holiday Shop, which provided on-demand delivery and pick-up of Christmas trees and more to customers in Los Angeles, San Diego, and West Palm Beach, as well as wreaths in New York City during the 2021 holiday season.

To access the Uber holiday hub, customers can open the Uber Eats app and tap the "Holiday" billboard (or search with seasonal holiday emojis) to obtain access to a wide range of retailers and their holiday aisles. Participating retailers have included Rite Aid, GoPuff, and Walgreens.

Your online liquor store
In another effort to broaden the type of on-demand services it offers, Uber executed an approximately $1.1 billion acquisition of Drizly, a Boston-based liquor delivery service. Drizly’s marketplace is being integrated as a feature within the Uber Eats app, while also maintaining a separate Drizly app and web experience.

At the time the merger was initially announced, Drizly said it plans to innovate and expand independently in the on-demand liquor delivery sector, while also gaining access to the advanced mobile marketplace technologies of Uber.

Retailers participating on Drizly will have access to Uber’s routing technology and consumer base, and drivers will have more orders to deliver. In addition, Uber can integrate its rewards and subscription programs with benefits and perks on Drizly.

Drizly is available and designed to be fully compliant with local regulations in more than 1,600 cities across 33 U.S. states. The company works with thousands of local retailers to provide consumers with a selection of beer, wine, and spirits for online home delivery.

I, robot
Uber is also moving toward e-commerce innovation by using self-driving robots to deliver fresh products on-demand. The company is partnering with autonomous sidewalk delivery company Serve Robotics to pilot an on-demand robotic delivery service in Los Angeles. Users of the company’s Uber Eats food delivery platform in the Los Angeles area will be able to have orders delivered contact-free by zero-emissions Serve rovers.