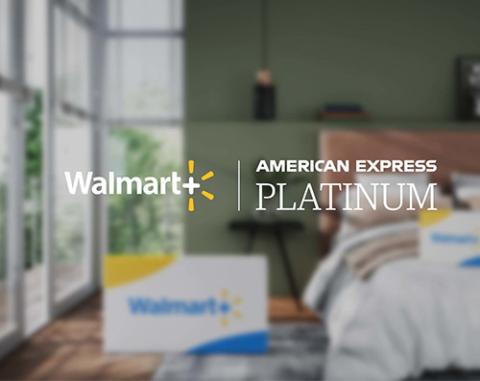 American Express is adding a new perk to holders of its premium Platinum card, which has an annual fee of $695.

In what Walmart said is an effort to deliver the perks of its Walmart+ paid membership program to more customers, the discount giant is teaming up with American Express.  Beginning Oct.7, holders of the American Express Platinum card who use their card to purchase a monthly Walmart+ membership can receive a statement credit which covers the full monthly membership cost of $12.95 a month, plus applicable taxes.

“We’re excited about this collaboration,” said Janey Whiteside, chief customer officer, Walmart U.S., in a corporate blog post. “We know it’s just the beginning for Walmart+. Our membership offering will only continue to grow – we’re working hard to perfect the solution for our members and, as we do that, we’ll continue to add more features and benefits that remove friction from our members’ everyday lives saving them more time and more money.”

Initially launched in September 2020, Walmart+ offers benefits including unlimited free delivery on most orders, gasoline discounts of up to 5 cents a gallon, and access to the chain’s Scan & Go app which allows shoppers to avoid checkout lines by scanning items in the store and checkout using Walmart Pay. The program has experienced rapid growth so far, with an April 2021 study from JungleScout indicating half of online Walmart shoppers are members of Walmart+, with another 23% who would consider joining in the future

JungleScout data also revealed that Walmart has grown its online customer base 13% since 2020, and is now the second-most-shopped online U.S. retailer after Amazon. Furthermore, Walmart saw high year-over-year growth during the 2020 holiday season, with its Black Friday and Cyber Monday events boosting fourth-quarter sales 124% from 2019.

Although Walmart has publicly denied that it launched Walmart+ to compete with any specific service, it does bear many similarities to the highly successful Amazon Prime paid membership program. JungleScout data indicates Walmart.com shoppers are also Amazon shoppers. More than three-quarters (77%) of U.S. consumers who shop online at Walmart hold Amazon Prime memberships, and 60% make purchases on Amazon at least weekly.

According to American Express, Walmart is already a top retailer for Platinum card members. Data from the American Express Amex Trendex trend index indicates three in four adults report they’ve spent more on online shopping in the past year compared to previous years. Nearly half of adults (45%) say that they have spent more on online grocery shopping and delivery in the past year compared to previous years, especially millennials (65%). And more than six in 10 (63%) adults have been shopping online at least one to two times a week over the past year.