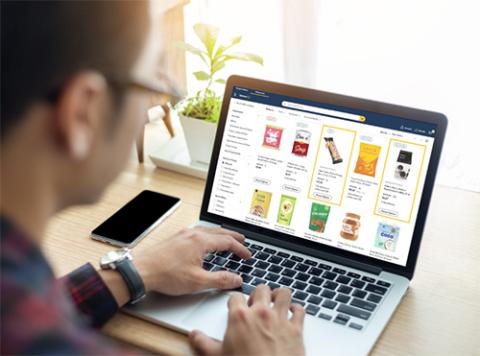 Walmart.com shoppers are also adopting a number of money-saving strategies at higher-than-average rates. Eighty-three percent of Walmart.com shoppers and 75% of all U.S. consumers look for ways to save money when shopping (e.g., coupons, promotions, deals). Similar discrepancies occur in rates of engaging in strategies such as becoming more conscientious of spending money (82% of Walmart shoppers versus 73% of all consumers), researching products before buying (78% vs. 69%), spending time planning or making lists in preparing for shopping trips (77% vs. 69%) and setting aside savings each month (50% vs. 46%).

Seventy-three percent of U.S. shoppers made purchases on Amazon in the first quarter of 2021, compared to 40% who made purchases on Walmart.com, JungleScout found. However, Walmart has grown its online customer base 13% since 2020, and is now the second-most-shopped online U.S. retailer after Amazon, ahead of Target.com at number three.

By contrast, exactly half of online Walmart shoppers are members of Walmart+ (Walmart’s equivalent to Prime), with another 23% who would consider joining in the future.

When asked why they haven’t shopped on Amazon recently, Walmart shoppers say they haven’t needed anything (31%), they’ve been trying to spend less money (27%), and that Amazon’s prices are too high (15%). Another 9% admit that they just don’t like Amazon. However, a majority of Walmart.com shoppers look to Amazon for products from specific brands (74%) and when they need fast shipping (71%).

JungleScout also found that 7% of existing Amazon third-party sellers also list products on Walmart Marketplace, and another 39% are considering joining the platform during 2021. Thirty-three percent of Amazon sellers believe Walmart Marketplace will compete strongly with Amazon in 2021.