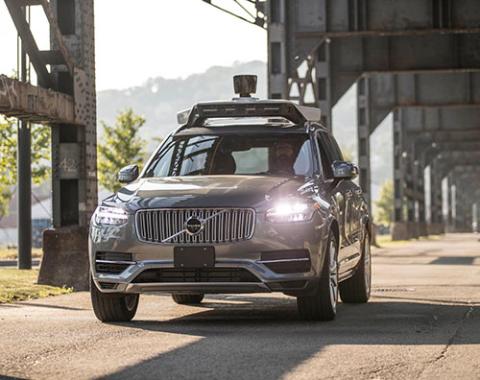 The Advanced Technologies Group (ATG) division of Uber, which develops and deploys autonomous vehicles, is running pilots of self-driving cars in Dallas, Pittsburgh, San Francisco, Toronto, and Washington, D.C. Uber uses a phased approach in its self-driving car pilots, beginning with a specially trained safety driver (called a mission specialist) in full control of the driving task at all times.

The vehicles are equipped with a sensor kit that makes them recognizable to other road users. Data gathered during this stage informs development of high-definition maps and common driving scenarios.

After self-driving technology has been thoroughly tested in simulation and on a test track, Uber deploys it on public roads in the areas it has mapped. At present, all self-driving system testing on a track or public road is done with two mission specialists in each vehicle. During these tests, Uber may carry select or whitelisted passengers who are not Uber employees.

Planned future steps include having computer-driven cars with a mission specialist behind the wheel take public passengers, and testing the self-driving system on public roads without a mission specialist in the front seat. Currently, Uber only runs tests during daylight hours in clear weather, and all pilots are occurring within city limits.

“Ultimately, we want to bring self-driving vehicles to the Uber network around the world,” Uber said in a corporate blog post. “As we develop our technology and start work in new cities, we want our stakeholders in those cities—future riders and other road users, government officials, public safety officials, and community groups—to know what to expect. We may collect personal data, such as individuals' images, in connection with the operation of self-driving vehicles.”

Uber temporarily halted on-road testing of autonomous vehicles following a March 2018 fatal accident involving a self-driving car in Tempe, Ariz. The company began an on-road pilot of the technology in Pittsburgh in December 2018. According to TechCrunch, the San Francisco test will last a few weeks and involve two Volvo XC90 vehicles equipped with Uber’s self-driving system.

Although Uber has not given any indication that its self-driving cars might be used for delivering online orders, its Uber Eats on-demand delivery platform supports numerous quick-service delivery programs, including those offered by Starbucks, McDonald’s and Burger King. According to a recent survey, the most popular food delivery app in the U.S. is Uber Eats.