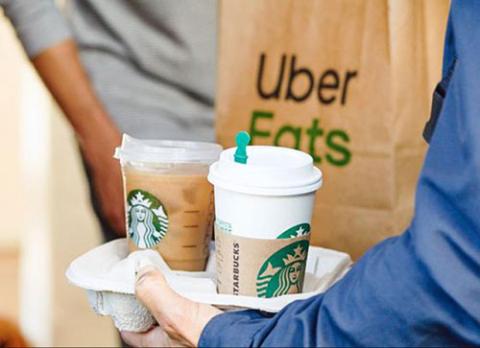 If Starbucks Delivers isn’t in your area, it probably will be soon.

The retailer launched Starbucks Delivers as a pilot in conjunction with Uber Eats in late 2018. The delivery service, which offers about 95% of core items on the Starbucks menu, is available via the Uber Eats mobile app on iOS and Android devices. Customers can follow orders within the mobile app, tracking progress and location of their Uber courier. Starbucks has also developed packaging to help ensure the quality of hot and cold menu items.

Orders can be customized as they would for orders on Starbucks mobile apps. Delivery orders have varying standard fees depending on factors such as customer location and availability of nearby couriers. There is a small order fee of $2 for orders under $10.

In addition to the U.S., Starbucks has launched delivery programs in more than 15 global markets, including Canada, Chile, China, Colombia, Hong Kong, India, Indonesia, Japan, Mexico, Singapore, the U.K., and Vietnam. Starbucks has made several investments to its global delivery initiatives, including voice ordering and delivery capabilities through Alibaba’s delivery platform Ele.me in China and expanding Starbucks Delivers, in partnership with Uber Eats, most recently in the U.K., U.S., and Canada.