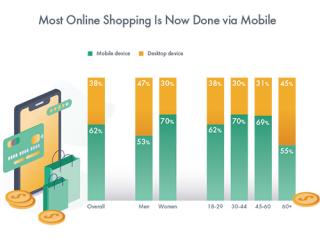 Most online shopping is now performed via mobile device.

Almost all online shoppers search for promotional codes and coupons, and more than six in 10 make purchases via mobile device.

According to a new survey of U.S. consumers from online deal platform CouponFollow, 62% of respondents stated they make the majority of online purchases on their phone. This includes 70% of women and 70% of those aged 18 to 29. Only 38% of Americans said they use a laptop or desktop computer to make online purchases.

Furthermore, 83% have used a digital promo code at least once when shopping online, and about three in four (73%) reported they love receiving digital coupons.

Clothing (59%), takeout (42%), and beauty/self-care (37%) were the top shopping categories for respondents that shop with coupons and promo codes. Meal delivery and pet supplies were tied for the fifth most common purchase type for promo code users (32%).

In addition, 73% of respondents admitted that receiving discounts from brands makes them more loyal customers, two-thirds (66%) discover brands through promo codes, and equally as many (66%) state they’d be more likely to visit a store in-person if they had a coupon to redeem there.

Price is the most significant online purchasing factor, with 84% reporting it’s part of their consideration and 61% saying it’s the single most important factor for them. Two-thirds (66%) of respondents said they became more price-conscious in the last 12 months.

Ratings came out third in the ranking of factors affecting online shopping, with a slight majority (51%) of respondents in the survey mentioning it. Much like with shipping time, it was marginally more important to the younger age group aged 18-29 (56%) than their older counterparts aged over 60 (49%).

Only 38% of respondents said brand affects their shopping decisions, and just 8% noted it was the key factor for them.

And it’s not just the digital coupons Americans are after. More than half (58%) used a physical coupon at least once when shopping. People aged 30-44 were most likely to use a physical coupon (63%) than any other age group, and those over 60 years old were least likely (49%).

CouponFollow surveyed more than 1,300 adults in the U.S. to identify key shopping trends and drivers, explore the use of coupons, and understand the role of digital discounts in how Americans shop online in 2021.