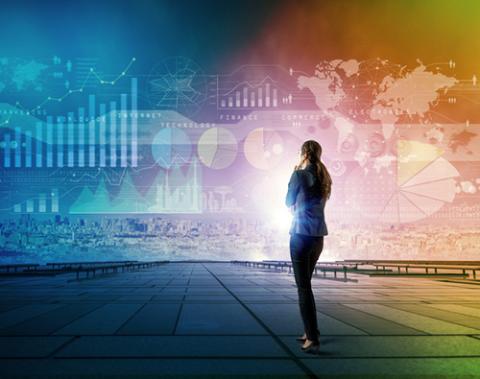 Throughout history, human beings have been notoriously bad at predicting the future of technology.

Western Union famously believed the telephone had “too many shortcomings” to be a serious method of communication. Charlie Chaplin thought movies were a fad. And, of course, too many people to count thought the Internet would never catch on. This had made most people today understandably skeptical when terms like “the store of the future” are thrown around.

But the truth is that the COVID-19 pandemic has had a major impact on the technology deployed by retail stores. Many stores were already in the process of digitizing their operations—the term “digital transformation” remains ubiquitous—but the health crisis underscored the need for capabilities like mask detection, people counting, heat happing, and other analytics with uses that go far beyond their pandemic applications.

It is not speculation to say that these tools will play a major role in shaping the store of the future—because for many stores, the future is already here.

Meeting the needs of the moment
In March 2020, many retailers went from business as usual to fighting for their survival in the span of a month. As the COVID-19 pandemic swept across the globe, regulations like occupancy limits and social distancing mandates went into effect, forcing stores to rethink their basic operations.

By now, conveniences like curbside pickup and buy online, pickup in-store (BOPIS) options are commonplace, but the transition was a jarring one for some stores. Fortunately, increased digitization has put new tools in the hands of retailers that helped them meet the needs of the moment.

Among those tools are improved video and audio analytics. As chipsets and processors have grown more powerful, cameras and other edge devices have dramatically expanded their capabilities. Retailers are no longer dependent on security personnel to monitor dozens of camera feeds—instead, today’s cameras can be trained to monitor video feeds to identify potentially suspicious behavior and raise an alert, augmenting the abilities of human security officers to increase both response time and image recognition accuracy.

Amid the pandemic, this technology was often repurposed to implement health and safety regulations by enforcing social distancing guidelines or detecting whether store customers were wearing proper PPE. Other analytics were deployed to keep track of occupancy limits and identify queues as they formed. Stores were able to use the same technology they deployed to detect after-hours intruders, shoplifters, and other potentially illegal activity to instead focus on public health and safety—something that would not have been possible just a few short years ago.

Going beyond security
Most top chefs will say that they do not like to purchase kitchen tools that only serve a single purpose, but rather have many different functions. This same philosophy is being applied to in-store technologies, as retailers look to implement solutions that can cover several business needs at the same time, such as safety and security as well as operational efficiencies.

One exciting element of analytics technology is that it has applications that go far beyond security and public safety. Many retailers might once have considered these analytics to be “nice-to-have” resources, but not essentials. With the pandemic forcing them to adopt the technology in the name of public health, many are now discovering that they have significant operations and business intelligence uses.

With 73% of consumers who typically visited shopping centers intending to return once they have been vaccinated, the time is now to put those new applications to use.

Surveillance cameras, once thought of primarily as loss prevention tools, have become an essential part of planning everything from store layouts to restocking strategies. Tools like heatmapping can give stores a better idea of where customers congregate, while also tracking the way in which they move through the store.

Identifying which products are attracting the most attention, where customers go when they first enter the store, and where choke points or other obstacles inhibit their movement can provide stores with valuable insights. Cameras integrated with store merchandising solutions can even generate out-of-stock alerts when they detect empty shelves.

This technology can help stores learn more about their customers. How do they tend to arrive? Do they walk, drive, or take the bus? How much do they tend to spend, and when? Do they like to browse, or do most avoid lingering? Today, this type of data is invaluable, and can even help stores gauge the success of marketing and promotional campaigns based on changes in traffic and purchasing patterns. As stores continue looking to reinvent the in-store experience to entice customers to come back, access to this sort of data will only become more essential.

Putting modern technology to good use
Retailers should be sharply focused on their security and surveillance plans as they work to transform their brick-and-mortar locations. Analytics-enabled security technologies such as people counting, queue management, and heat mapping are all solutions that have helped the retail industry maintain safety and operations, particularly during the pandemic.

While many of these solutions were originally implemented to address the challenges posed by COVID-19, their potential applications go far beyond the health crisis. The “store of the future” will be built upon both automation and information—and for many stores, the future is now.