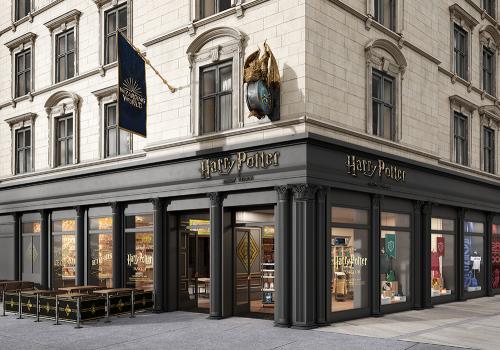 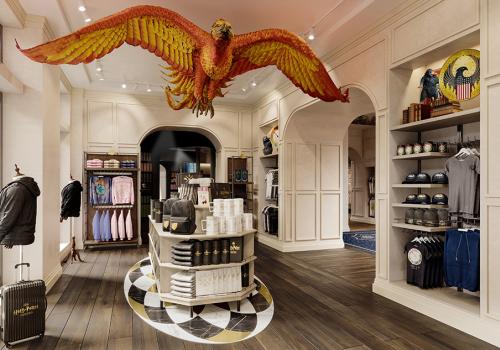 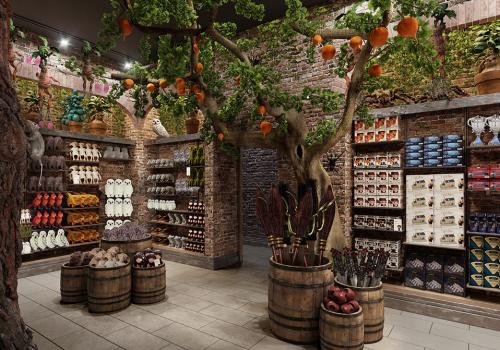 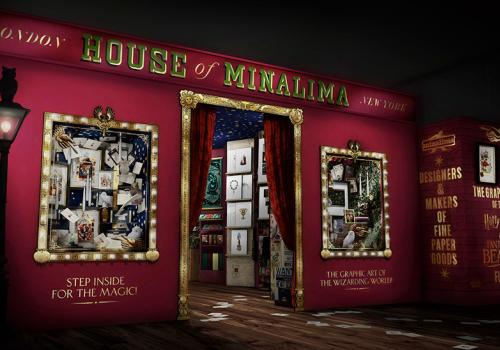 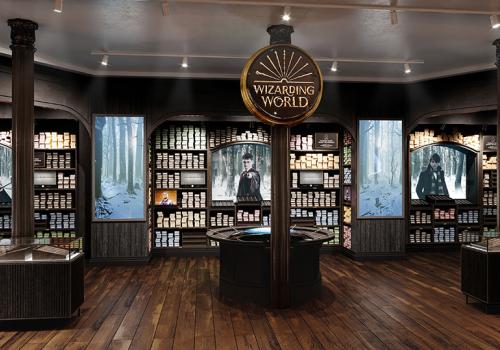 A themed flagship featuring the largest collection of Harry Potter and Fantastic Beasts merchandise under one roof is set to open in the Big Apple.

Warner Bros. will unveil the Harry Potter New York flagship, at 935 Broadway in mid-town Manhattan, on June 3.  The three-floor, 21,000-sq.-ft. store will feature 15 different themed areas, each one designed to bring the magic of the “Harry Potter Wizarding World” to life. More than 1,000 props will be on display, including some authentic items used in the movies.

Entering the store, customers will pass under a huge model of a familiar Harry Potter-related creature, Fawkes the Phoenix. The model, created by a team of propmakers, weighs more than 220 lbs. and is one of many detailed, handmade props located throughout the store.

A rotating stature of a Griffin, the magical beast of Harry Potter fame, stands guard in the main atrium. Adjacent to this is the Wand Shop, featuring more than 50 wands inspired by characters, locations and props from the Wizarding World.

An array of photo opportunities are available, from posing inside a London phone box or inside Hagrid's boots. Digital technologies will be integrated throughout the store, including with the Harry Potter fan club app. Users will find a number of “enchanted keys” in the space that unlock exclusive behind-the-scenes facts, figures, and videos that help bring the store to life.

The store boasts two multiplayer virtual reality experiences, both of which will open this summer. The VR adventures are location based, allowing real-time interactive exploration of the Wizarding World. "Chaos at Hogwarts" lets hopeful witches and wizards step into a magical journey to Hogwarts Castle and become part of the adventure. In the “Wizards Take Flight" VP experience, visitors can fly on brooms in a magical wand battle against Death Eaters over the skies of London and around the grounds of Hogwarts Castle.

Other store features include a personalization area offering a host of options, including engraving a wand, embossing a journal or embroidering a House robe with a fan’s name. Candies and other treats will be sold in an area modeled on Honeydukes, the sweet shop of Harry Potter movie fame.

In addition, the flagship will be home to a gallery and in-store shop — House of MinaLima— showcasing the graphic art of the Wizarding World. (House of MimaLima is the design studio behind the graphic props of the Harry Potter and Fantastic Beasts films, founded by Miraphora Mina and Eduardo Lima.)

Harry Potter New York will open with a virtual queueing system in place. When customers visit the store, they will scan a QR code to join the virtual queue and return when notified.

"The level of artistic detail and quality of the design inspired by the movies means Harry Potter New York will bring a completely new shopping experience to the city,' said Sarah Roots, executive VP Warner Bros. worldwide tours and retail. 'With over 1,000 Wizarding World props on display (including some authentic items which featured in the movies), the incredible theming, along with experiences such as photo opportunities and the fantastic range of products, there will be something special for every fan."

The store will follow all CDC guidelines, opening at a reduced capacity to ensure physical distancing can be maintained throughout. All customers will be required to wear a face covering when visiting the store.