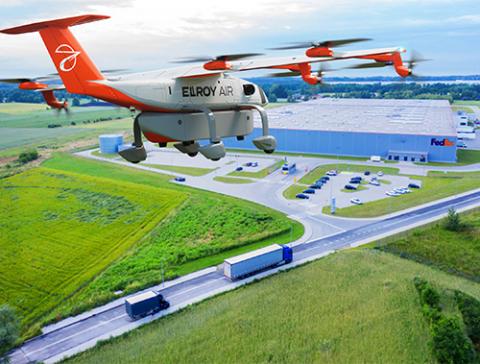 FedEx Corp. will test the viability of autonomous drones for moving shipments between sortation locations in its fulfillment network.

Introduced in January 2022, the Chaparral aircraft can autonomously pick up 300-500 pounds of cargo and deliver it by air up to 300 miles. The Chaparral is capable of longer-range flights without the need for additional infrastructure, such as airports or charging stations. FedEx and Elroy Air have been working together since January 2020 and will continue their collaboration to pursue certifications and begin flight testing in 2023.

The pilot begins runs along FedEx’s Dallas-Houston parcel lanes, completing the nearly 500-mile round trip route multiple times each week. In June 2021, FedEx entered a multi-year, multi-phase agreement to test Nuro autonomous delivery vehicles for last-mile delivery of parcels to customers within its operations.  The collaboration launched in April 2021 with a pilot program across the Houston area. The Nuro partnership was another step in FedEx actively competing with Amazon in everything from electric delivery vehicles to providing hosted e-commerce services.

In addition, Walmart has piloted self-driving vehicles in its supply chain from Gatik, a Palo Alto, Calif.-based startup specializing in providing autonomous vehicles for B2B short-haul logistics. Walmart tested autonomous vehicles in moving customer orders on a two-mile route in Bentonville, Ark., where the company is headquartered, between two of its stores.

“FedEx was built on innovation and we are always looking toward new technologies to help enhance the logistics industry through improved safety, efficiency and customer service,” said Joe Stephens, senior VP, global planning, engineering and technology, FedEx Express. “We look forward to continued testing and learning throughout our collaboration with Elroy Air.”

“We are proud to work with FedEx to build the next generation of express logistics,” said Kofi Asante, Elroy Air VP of business development and strategy. “When you’re not limited by challenging infrastructure, traffic, or airports, logistics can reach more people, faster than ever before. We look forward to working together to create a new future for how we get goods to people around the world.”