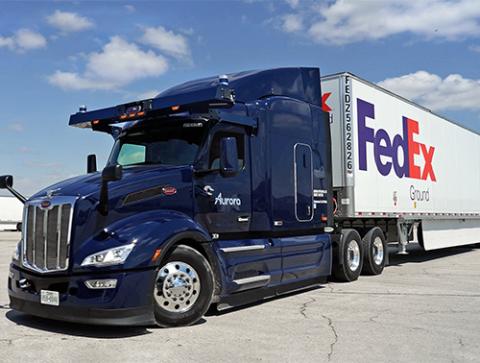 FedEx Corp. is continuing its efforts to stay competitive with Amazon in the area of autonomous cargo hauling.

In March 2022, Aurora's autonomous trucks, based on the new Peterbilt 579 truck model, began to transport FedEx shipments between Aurora’s new terminals in Fort Worth and El Paso. Aurora trucks are making the 600-mile trip on a weekly basis with safety drivers on board.

The frequency of trips is expected to increase n the coming months. Aurora also continues to move shipments for FedEx between Aurora’s South Dallas terminal and its new Houston terminal on a daily basis.

Since the commercial pilot began in September 2021, the companies report that Aurora’s deliveries of FedEx shipments between Dallas and Houston have been 100% on time. To date, the companies have completed 60,000 miles with zero safety incidents.

A Morgan Stanley analyst predicted FedEx would eventually have to increase its autonomous delivery presence when Amazon purchased autonomous vehicle manufacturer Zoox in June 2020. Now, FedEx is competing with Amazon’s use of Embark self-driving trucks to haul some cargo on the I-10 interstate highway that runs from California to Georgia, as reported by CNBC.

In addition, Walmart has piloted self-driving vehicles in its supply chain from Gatik, a Palo Alto, Calif.-based startup specializing in providing autonomous vehicles for B2B short-haul logistics. Walmart tested autonomous vehicles in moving customer orders on a two-mile route in Bentonville, Ark., where the company is headquartered, between two of its stores.

“Innovation is in our DNA – our culture drives us to think radically and differently, finding new ways to use technology to enhance safety, improve our operations, empower our team members and help our customers succeed,” said Rebecca Yeung, corporate VP, operations science & advanced technology, FedEx Corp. “Aurora has been a like-minded collaborator, helping us learn from and grow our autonomous trucking solutions. We look forward to our continued work together as we test further integration of autonomous technology into our operations to build a collaborative, robust network of solutions to respond to growing customer demand.”

“Some time ago, I was asked why the general public should care about autonomous trucking. This is why. In six months of working with FedEx, we’ve safely, reliably, and efficiently transported packages for tens of thousands of FedEx customers,” said Sterling Anderson, Aurora co-founder and chief product officer. “This lane expansion came ahead of schedule and we’re delighted to continue building the future of trucking with one of the country’s biggest and most important transportation companies.”