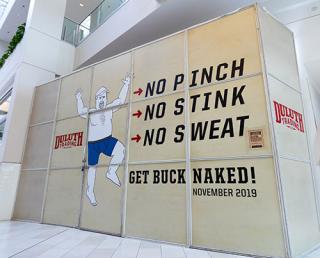 Duluth Trading Co. is holding on to its irreverent style as it continues to expand.

The men's and women's casual clothing and workwear brand will debut a new concept, called "The Museum of Man Area and Underwear Shop," on Nov. 7, at Mall of America, Bloomington, Minn. The store is designed to Duluth Trading's underwear styles for men, with sections dedicated to its four main product lines.

The museum part of the space will feature interactive, museum exhibit-inspired product displays that will entertain and educate shoppers during their search for the best pair of boxers or briefs, the company said. Additionally, touchpoints to Minnesota will be located throughout the store, including a custom mural designed by local artist Adam Turman that harkens back to the brand's roots in Duluth, Minnesota.

"We've been obsessed with advancing underwear comfort for the working man since we first introduced Buck Naked Underwear almost 10 years ago," said Ricker Schlecht, VP of product development and creative, Duluth Trading, which operates approximately 55 stores. "The Museum of Man Area celebrates all the breakthroughs we've had and all the pinching, chafing and overheating we've solved over time. Oh yeah, and there's a giant rooster – I'm speaking literally, not figuratively."

Founded as a catalog retailer, Duluth Trading opened its first physical store in 2010. The brand is known for its fun marketing and engaging in-store and online experiences. Duluth bills its retail format as a “store like no other” and backs its products with a “No Bull Guarantee.”