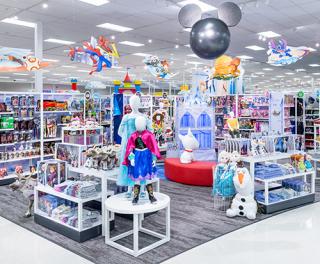 Target Corp. has launched its in-store and online partnership with The Walt Disney Company.

The discounter opened in-store Disney shops in 25 Target locations and a complementary online experience. The dedicated spaces feature an expanded Disney assortment of more than 450 items, including more than 100 products that were previously only available at Disney retail locations. (Most of the merchandise is also available online.)

Featuring a "shop-in-shop" layout, the Disney stores in Target average 750 sq. ft. and are located adjacent to kids clothing and toys. Forty additional locations are expected to open by October 2020.

Target and Disney announced the venture in August. Target said it worked closely with Disney to co-develop and design the in-store experience, which includes features such as music, interactive displays and photo ops. The space also includes a seating area where families can watch Disney movie clips and play games. Visitors can try on Mickey's magic hat, pose with a life-size lightsaber and wear a prince or princess crown.

"We've brought the magic of Disney to Target, bringing together great merchandise amidst an experience that's truly immersive and unique," said Mark Tritton, executive VP and chief merchandising officer, Target. "Guests will be able to connect with the Disney characters and stories they love in a meaningful way while accessing the latest and greatest Disney products, including items previously only available at Disney retail locations."

Target’s collaboration with Disney comes as the entertainment giant, which operates about 300 stores globally, is dealing with traffic declines at the malls where many of its U.S. stores are located. Disney also has an agreement to sell its products in J.C. Penney stores, but the initiative is not Disney branded and does not contain as many products as the Target shops will.