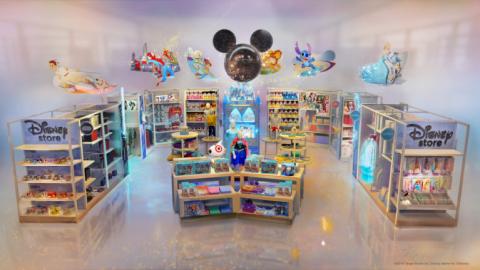 Target Corp. is looking to bring the magic of Disney to its stores and e-commerce site via a pilot with the entertainment giant.

The discounter plans to open dedicated Disney Stores at 25 Target locations on October 4, with 40 more opening by October 2020. The in-store shops will feature more than 450 items, including toys, games, apparel and accessories —with more than 100 products that were previously only available at Disney retail locations. The retailer has also added a Disney-themed experience to its website, with the full site launch in October.

The Disney brands represented in the new venture will range from Pixar to Marvel to Star Wars as well as classic Disney. The shops will open just as the new assortment of merchandise from Disney’s Frozen 2 and Star Wars: The Rise of Skywalker hits shelves. Prices will range from $2 to $200, with many items under $20.

Target said it worked closely with Disney to co-develop and design the store experience, which will average about 750 sq. ft. and include features such as  music, interactive displays and photo ops. There will even be a seating area where families can watch Disney movie clips.  The shops will be located adjacent to Target’s toys and kids’ clothing departments.

“We believe the combination of Disney’s unmatched entertainment and storytelling with our omni-channel retail platform will create inspiring and unique experiences for our guests,” stated Brian Cornell, chairman and CEO, Target. “This collaboration reflects the strength of our platforms and assets to create value for guests and growth for both companies beyond the traditional retail model.

In addition, Target announced it will open a store at Flamingo Crossings Town Center in Orlando, at the western entrance of the Walt Disney World Resort,  in 2021.

“Disney is among our largest and most admired [brand] relationships,”  Cornell said on a media call. “We have spent a lot of time thinking about how to grow.”

The move comes as Disney,  which operates about 300 stores globally, is dealing with traffic declines at the malls where many of its U.S. stores are located.  Disney also has an agreement to sell its products in J.C. Penney stores, but the initiative is not Disney branded and does not contain as many products as the Target shops will.

Last year, Target was among a bevy of retailers that expanded their toy offerings ahead of the holiday season and in the wake of Toys “R” Us’ departure from the retail marketplace.

To see the 25 stores where Target will launch the Disney store, click here.