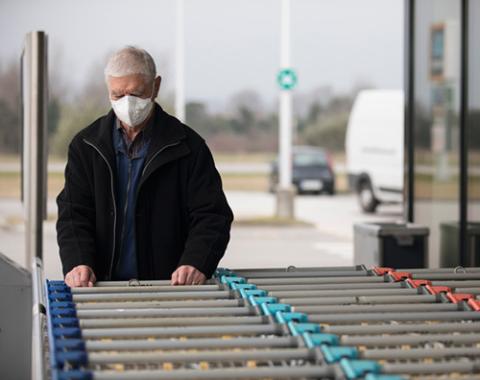 Since March 1, the entire retail sector has undergone a huge sea change, with several major sectors seeing severe declines in business, even before virtually all specialty apparel and department stores closed the week of March 15, along with many other specialty stores. The apparel & accessories and department stores have been most challenged, across almost all formats and all price-points.

Meanwhile, a few sectors actually enjoyed a modest increase in trade over the year-earlier period (March 1-31)—notably the big-box discounters, smaller discounters and essential hardlines retailers that have not closed, as well as food and drug stores.

• Big-box discounters saw a solid five-point jump in conversion rates, as shoppers who ventured out were intent on buying their needs.

• The specialty apparel and department store sectors both saw a decline of about three points from last year.

• Same-store (comp) transactions—of the stores that remained open throughout March—collectively rose almost 6% year-over-year, including a key contribution from online (or hybrid click & collect) channels, despite a sharp nine-point decline at small-format retailers.

• Home improvement stores are seeing a robust spring bounce as homeowners stay at home in the “cocooning” mode, while they redirect outside restaurant, entertainment and travel spending, instead refocusing on the home.

• Big-box discounters also outperformed, up almost 3% in comp traffic from last year, buoyed both by panic buying and hoarding, and by their focus on non-discretionary categories such as food & beverages, household essentials (from toilet paper to cleaning chemicals), and both pharmacy sales and OTC medicines.

• The strong transaction velocity of the big-box discounters and hardlines retailers was partly mitigated by slight declines in average comp ticket (dollars per transaction), down about 1% year-over-year. Overall comp ticket rose fractionally, bolstered by almost 9% ticket growth at small-format discounters—offsetting their weak comp transaction pace, as shoppers consolidated their trips.

To date, the winners—if any can be ordained during this crisis—are the superstores, warehouse clubs and hardlines retailers that allow shoppers to fulfill both discretionary and non-discretionary purchase requirements, while offering consumers a broad choice of in-store, digital or hybrid online channels—and a wide-open shopping environment that allows consumers to maintain social distancing if they do make a store trip.