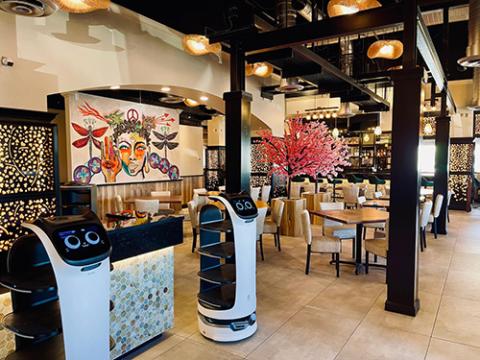 In an exclusive interview with Chain Store Age, Ching Ho, CEO of Dragonfly Brands, explained how the operator of two Dragonfly Kitchen restaurants in New Jersey is partially automating its store environment to enable profitability. The company currently plans to open another six locations across New Jersey.

“After the COVID-19 pandemic first hit, we were shut down for four months and there was nothing we could do except run on a delivery-only model at negative cash flow,” said Ho. “The only restaurants doing well at the time were drive-thru, which we didn’t have, so we decided to try the ghost kitchen model.”

A ghost kitchen is a delivery/pickup-only restaurant location with multiple brands operating under one roof, sharing kitchen facilities and staff and typically using third-party delivery platforms for order fulfillment. Once Dragonfly Kitchen was able to reopen for dine-in business, the company bundled six to eight brands in a ghost kitchen operation which it combined with its sitdown business.

“A pure ghost kitchen doesn’t work,” explained Ho. “Food and labor are 70% of a food service business’s expenses. Rent and overhead are another 15 to 20%.
Delivery services take 25 to 30%, meaning no profit is left over. Previous successful ghost kitchens took a real estate angle and rented space to small operators, or are subsidized by investors.”

Automation – including cats
In order to cover its fixed costs, Dragonfly Kitchen decided to control expenses by utilizing innovative automation technology in key areas of the business. Most notably, the company deployed interactive service robots with animated cat faces from Pudutech. The robots run appetizers and drinks to tables. The robots are guided by lasers and lights to within six inches of a table and include object avoidance programming.

“The cat robots do not replace staff,” said Ho. “They reduce the number of trips a server has to make to the table by supporting chore work. We now only have to dedicate two employees to running appetizers and drinks instead of three. For main entrees, we still use a human runner.”

The cat robots deliver other benefits, according to Ho. “The robots make sounds and faces like a cat,” he said. “They’re tactile. If you rub their ears, they purr like a cat. Kids love them.”

On the front end, Dragonfly Kitchen also deployed a solution that enabled customers to order directly from a QR code at the table, with order information sent to its Hartland Systems POS system. Orders are not transmitted until the customer makes payment.

Less attention-grabbing, but no less important, is a semi-automated deep fryer in the kitchen that removes the need for a skilled person to operate it. Hamburger chains Jack in the Box and White Castle, have also been piloting robotics in the kitchen, including automated fryers.

Looking ahead, Dragonfly Kitchen plans to launch a new membership club that will offer a food credit to “die-hard regular” customers for a monthly fee.

“Food is our only variable cost left,” said Ho.