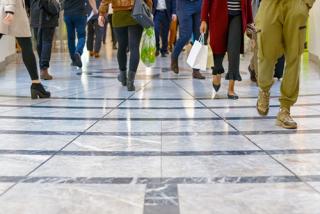 There is good news and bad news for retailers about Black Friday.

The good news is slightly more consumers say they intend to go into physical stores on Black Friday this year than in 2018 – 39%, up 2% from the response in a similar consumer survey last year, according to a report by Genesys.

However, 61% of U.S. consumers said they do not plan to shop in-store on Black Friday and, of that total, 33%  said they simply "never" go. In a challenge for retailers, 28% claim they used to go shopping on Black Friday but have stopped.

U.S. survey participants cite three main reasons for not planning to go into physical stores on Black Friday 2019, starting with that the stores are too busy (37%). That’s a big difference from last year, when 67% cited crowds as their main reason for staying home.   Other reasons for staying away from stores on the big day: the price reductions are not worth the inconvenience (25%); and online shopping is easier (27%).

The survey found that poor customer service isn't the culprit for many Americans' choice to avoid stores. In fact, only 4% say it is their primary reason for not going into brick-and-mortar stores on Black Friday. This is a drop from 8% in the 2018 survey.

Black Friday shopping patterns are also affected by geography, according to the survey. More survey respondents living in the Western region (47%) say they plan to go into physical stores this Black Friday, compared to Northeasterners who had the lowest likelihood at 33%. Northeasterners are more likely (35%) than the national average (27%) to feel that online shopping is easier.

Northeasterners also represent the largest regional populace (36%) to say they used to go into physical stores over the holiday weekend but no longer do. The same percentage of Southerners (36%) say they simply never go.

The Black Friday holiday shopping trends are results from a wider research survey to be released in November by Genesys. The Resources section of the Genesys web site will feature additional insights in November.