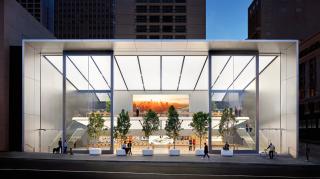 Another high-profile retailer is facing  a union organizing effort.

Employees at the Apple store in Grand Central Terminal in mid-town Manhattan have begun collecting signatures to file a petition to unionize. The employees leading the effort are partnering with Workers United, an affiliate of the Service Employees International Union, which is the same union supporting the growing union push at Starbucks.

The organizers at Apple’s Grand Central location call themselves “Fruit Stand Workers United.” The group detailed their mission  — and complaints about Apple — on a website. Among other things, the group says Apple wages have not kept pace with the cost of living in New York City over the years.

“For pay, we seek a minimum $30 for all workers, built up on a matrix based on role, tenure, and performance,” the group said on its website. For benefits, we seek more robust changes, like increased tuition reimbursement, faster accrued and more vacation time, and better retirement options, including higher match rates for 401(k) and enrollment into pension plans.

Apple employees can make from $17 to more than $30 per hour, depending on their experience and the market, according to a report by The Washington Post. The union effort at Apple comes after Amazon employees at a warehouse in the New York City borough of Staten Island voted to unionize.