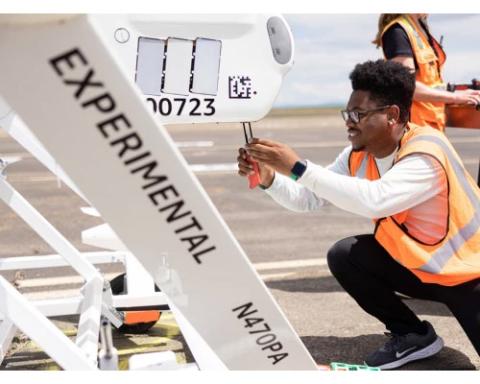 Amazon Prime Air tests drones at a facility in Oregon.

As it prepares to move beyond the pilot stage with drone-based delivery, Amazon is publicly discussing the technology and design features of its proprietary drones.

Amazon is building fully electric drones to deliver packages under five pounds to customers in less than 60 minutes. In a new corporate blog post, the e-tail titan discusses some of the specifics regarding the technology, safety measures, and regulatory certification underpinning its Amazon Prime Air drones.

There are three main drone components Amazon focuses on:

The company also recently announced that customers in Lockeford, Calif., will be among the first to receive Prime Air drone deliveries in the U.S. Amazon will fulfill drone deliveries in less than one hour from the time an order is placed. For these deliveries, the drone will fly to the designated delivery location, descend to the customer’s backyard, and hover at a safe height. It will then safely release the package and rise back up to altitude.

The company says it has created more than two dozen Prime Air delivery drone prototypes, including a model publicly unveiled at its 2019 re:MARS conference (Machine Learning, Automation, Robotics and Space) in Las Vegas. The company’s first test drone delivery in the U.S. took place at its March 2017 re:MARS conference, preceded by its first U.K. delivery by drone in December near Cambridge, England in December 2016.

“While it’s impossible to eliminate all risks from flying, we’re taking an aerospace approach to create a system that will be safer than even road-based transportation,” Amazon said in the blog post. “This is just the beginning. We are constantly redefining, iterating, and experimenting to meaningfully transform the customer experience. We look forward to continuing to learn as we methodically expand this program to more customers in months and years to come.”