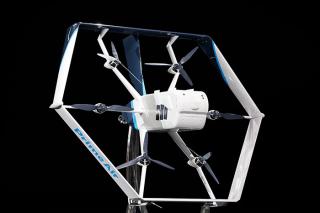 Amazon is aiming for deliveries of small items in less than 30 minutes with its latest drone design.

The e-tail giant publicly debuted the new drone at its re:MARS conference (Machine Learning, Automation, Robotics and Space) in Las Vegas. The new drone features a hybrid design, meaning it can perform vertical takeoffs and landings like a helicopter. However, the drone can also shift to an airplane mode once it is in the air for efficient, aerodynamic flight.

The drone’s wings also serve as shrouds that enclose the device for safety. For additional safety, Amazon designed the drone with six degrees of motion freedom, instead of the standard four for aircraft, which makes it more stable, and capable of operating safely in more gusty wind conditions.

Furthermore, artificial intelligence (AI) technology enables the drone to independently react to changes in its flight environment. While in transit, computer vision and machine learning technology will let the drone detect static and moving objects in its path. Before descending for delivery or ascending after a delivery is complete, stereo vision technology and AI algorithms allow the drone to detect and avoid obstacles such as people, animals, and wires.

Amazon intends the new drones to fly up to 15 miles and deliver packages under five pounds to customers in less than 30 minutes.

“(W)e know customers are always looking for something better, more convenient, and there may be times when one-day delivery may not be the right choice,” Jeff Wilke, CEO of Amazon worldwide consumer, said in a corporate blog post. “Can we deliver packages to customers even faster? We think the answer is yes, and one way we’re pursuing that goal is by pioneering autonomous drone technology.”

The company expects to deliver packages via Prime Air drone to customers within months. Amazon also says the electric drones are part of its Shipment Zero program intended to make all Amazon shipments net zero carbon by 2030.
Advertisement