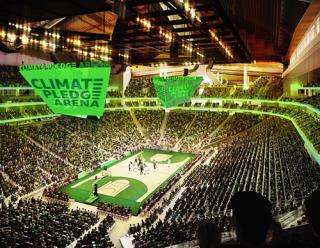 Initially announced in June 2020, Climate Pledge Arena is a redevelopment of downtown Seattle’s KeyArena. The name refers to The Climate Pledge, launched in 2019 by Amazon and climate change network Global Optimism, which calls on signatories to be net-zero carbon across their businesses by 2040.

The new facility is expected to be the first arena in the world to receive net zero carbon certification by the International Living Future Institute (ILFI), and will have all-electric operations powered with 100% renewable electricity, both from on-site solar panels and off-site renewable energy.

Customers visiting the four Just Walk Out-enabled stores at Climate Pledge Arena can insert their credit card at the location's entry gates to shop, or can hover their palm over an Amazon One device to enter. Once inside, customers can take what they want and then leave after they're done shopping.

As customers shop, Just Walk Out technology determines what they take from or return to the shelves, and the credit card they inserted or linked to their Amazon One ID will be charged for items they took after they leave the store. If a customer is new to using the Amazon One palm recognition service, they can enroll in less than a minute at any of the Amazon One enrollment kiosks located near the Just Walk Out technology-enabled stores on the arena's main and upper concourses.

The Just Walk Out technology-enabled stores will sell beer, wine, soft drinks, coffee, water, and feature food offerings from The Climate Collective, the arena's food and beverage program. Customers purchasing alcohol will be required to show their ID to a store attendant for age verification.

In addition to being offered at Amazon Go convenience stores and Amazon Fresh grocery stores, Just Walk Out has also been licensed to other third-party retailers.

"We're excited to work with Climate Pledge Arena to offer guests the ability to shop quickly and effortlessly when they're enjoying a concert or a game at the new arena in Seattle, using a combination of both Just Walk Out technology and Amazon One," said Dilip Kumar, VP of physical retail & technology at Amazon. "Our physical retail technologies are designed to remove friction for customers as they shop, and we're thrilled Climate Pledge Arena is offering checkout-free experiences for their guests so they can quickly get what they need and return to their event."

Climate Pledge Arena, located at Seattle Center, is the complete redevelopment of a historic landmark, originally built for the 1962 Seattle World's Fair. Home to the NHL's Seattle Kraken, WNBA's Seattle Storm, and performers of live music and events, Climate Pledge Arena will open in October 2021.