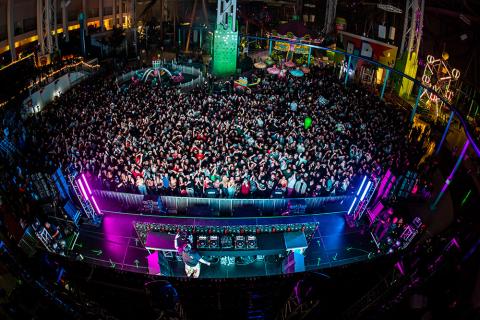 American Dream is located at the Meadowlands, New Jersey

The desire for one-of-a-kind retail center experiences is in Don Ghermezian’s DNA. His rug merchant grandfather Jacob operated a large bazaar in Uzbekistan before moving to North America to build West Edmonton Mall and Mall of America and create the Triple Five Group. His father and three uncles are pillars of the business.

Twelve years ago, the company purchased Mills Corporation’s huge Xanadu center in the Meadowlands, and Don has driven the re-creation of that failed project. His ride has been more harrowing than the roller coaster at Nickelodeon Universe at American Dream.

Despite the investment press’s constant badgering of the project (shut down by COVID just months after its October 2019 opening), visits to American Dream were 33.3% percent higher than they were in May 2021. The average increase for 200 top malls in the United States during that period was just 2.3 %, according to Placer.ai.

American Dream aficionados don’t read the investment press, apparently. They’ve been flocking to The Meadowlands to experience the 27 rides at its theme park, to bask at the nation’s largest indoor swimming pool at DreamWorks water park, to ski indoors at Big Snow and skate on its regulation NHL ice rink, to view Manhattan on its 300-foot-high Dream Wheel and, of course, to shop or dine at its 450-plus stores.

“During spring break this year, our 11,000 parking spots were full by noon. More than 160,000 people visit our center daily. A recent guest survey learned that 92% of guests have come back to American Dream since their first visit, a mind-blowing statistic,” said Ghermezian, who runs the property and is CEO of Triple Five.

Negative press notwithstanding, Ghermezian has doggedly pursued his mission to offer consumers experiences unlike any they’d find in any other retail center. The recent deal he made with Live Nation is a great example.

In May, Triple Five signed a deal with the concert promoter consortium to book exclusive entertainment and trade shows at the property. Hip-hop star Ludacris was the first headliner in May, and was followed by rappers Lil Tjay and Shek Wes, and DJ Steve Aoki (above).

“We had over 250 events in Q1 alone and anticipate that number to grow to 2,000 annually,” Ghermezian said.

Sounds like the forger of American Dream follows the wisdom of another well-known creator of theme parks, Walt Disney, who said, “All our dreams can come true, if we have the courage to pursue them.”

Stay tuned for daily profiles of the next five centers. Until then, catch up on what you missed:

No. 4 Tuscan Village
No. 5 Atlantic Station
No. 6 Oakbrook Center
No. 7 La Centerra At Cinco Ranch
No. 8 Town & Country Village Shopping Center
No. 9 Streets of St. Charles
No. 10 RIO