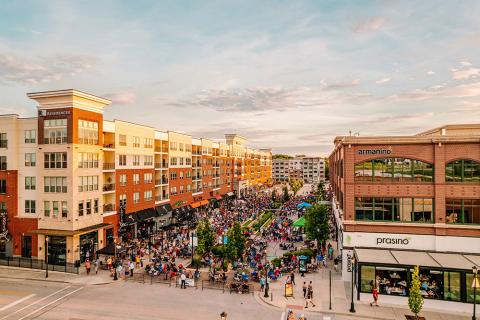 The site off the South 5th Street Exit in St. Charles, Mo., had been a traffic-grabber since the 1960s, when the Noah’s Ark restaurant drew steady crowds until it closed in the Nineties. The site turned barren. Then Cullinan Properties arrived.

The company that transformed a closed Caterpillar Tractor plant in East Peoria into a booming complex called The Levee District in East Peoria is in the process of doing the same alongside the Mighty Mississippi.

Streets of St. Charles’s retail lineup is a people-pleaser as well at a property that is the first true mixed-use center in Metro St. Louis. Buff City Soap, Orangetheory, Massage Luxe, and Mod on Trend lead the lineup.

“We built a streetscape that wasn’t cookie cutter. Every building’s different,” noted Cullinan CEO Matthew Beverly. “And if you leave the center and go just half a mile, you’ll get to the historical streets of St. Charles.”

Stay tuned for daily profiles of the next eight centers. Until then, catch up on what you missed: