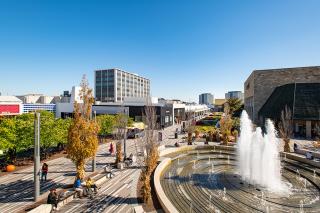 Tim Geiges, the senior general manager of Oakbrook Center for the last four years, says that he always admired this Brookfield property during his long Chicagoland career.

“It’s the hub of the Western suburbs and beyond,” said Geiges. “It’s also the place where retailers want to launch their new concepts.”

It was one of the first stops for Puttshack and it’s the first site of The Table and Crate, Crate & Barrel’s first and only in-store restaurant.

The outdoor mall has seen shopping rise after a 2013 renovation that transformed Oakbrook into a “village” with green spaces, revitalized storefronts, and warming pavilions.

Walkways are lined with a score of bars and restaurants such as The District food hall, Antico Posto, Old Town Pour House, Perry’s Steakhouse & Grille, and Picolo Buco, a new concept from Cooper’s Hawk.

Last year, thousands of visitors from Illinois and out of state flocked to Oakbrook Center to see “Michelangelo’s Sistine Chapel: The Exhibition,” which featured life-sized recreations of the Renaissance artists masterpieces.

“We have a lot of people who come to Oakbrook, but not to shop,” Geiges said. “It’s not unusual for some people to come here on a shopping trip and end up staying several hours.”

Stay tuned for daily profiles of the next six centers. Until then, catch up on what you missed:

No. 7 La Centerra At Cinco Ranch
No. 8 Town & Country Village Shopping Center
No. 9 Streets of St. Charles
No. 10 RIO