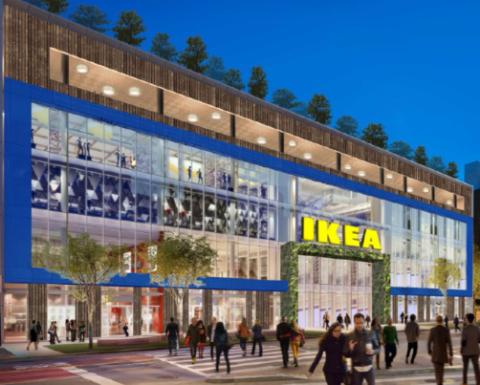 Construction is finally underway at Ingka Centres' first Ikea-anchored urban center in the U.S. on Market Street in San Francisco.

Ingka Centres’ long-brewing plan to plant smaller Ikea stores in downtowns across the globe has gotten underway in San Francisco.

The real estate development arm of the Ingka Group, of which Ikea Retail is also part, has begun renovation of the 6 X 6 Building on 945 Market Street, a 375,000-sq.-ft. property it bought for nearly $200 million in late 2020. Construction was delayed by the pandemic.

The project will include other retail and restaurant tenants and will be anchored by a 70,000-sq.-ft. Ikea store. The remaining space in the center will be leased to food and beverage, entertainment, retail, and office tenants and Ingka has secured building permits for $6.6 million on tenant improvements in recent weeks, according to the San Francisco Chronicle.

“There are about 40 to 45 cities we’ve identified globally where we could open these centers, to be anchored by Ikea stores running between 50,000 and 80,000 square feet,” Gerard Groener, then managing director of Ingka Centres told Chain Store Age in 2020when the San Francisco site was acquired. “We’ve found we could buy bigger buildings in these cities—they could be an old mall or a post office—and redevelop them into what we are calling ‘meeting places.’”

The 6 X 6 Building—one of the largest recently completed in Mid-Market—is situated between Union Square, the Hotel District, and the South of Market (SOMA) neighborhood, which has seen a decline in foot traffic during the pandemic. Brands that have disappeared from the street include Marshalls, H&M, Uniqlo, and DSW.

Ingka, which owns and operates more than 40 malls and centers in Europe and Asia, introduced an $8.6 billion plan to upgrade its portfolio in 2018. One of its initiatives are urban centers, the first of which was built in the Hammersmith section of West London. Another is planned for downtown Toronto, where Inga acquired The Shops at Aura mall last year.