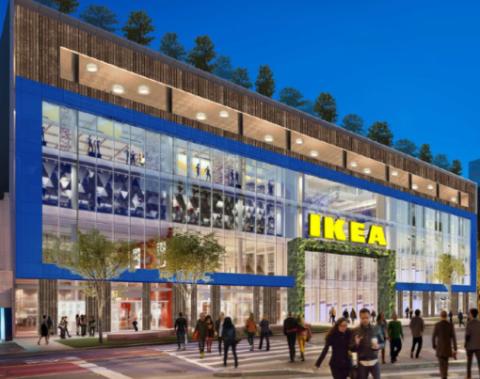 In a time when news about retail stores mostly concerns their closings, the opening of one particular store brand remains a jubilant event in nearly every region of the country, and that brand is Ikea. Its massive blue and yellow presence, its singular shopping concept, and its ability to attract attention draws shoppers from more than a hundred miles away in some regions.

“Ikea has been known for developing and deploying big boxes in a potato field in Nebraska. That’s what people know Ikea for. But we looked at that strategy and determined it was not enough for us to be successful in the future,” said Gerard Groener, managing director of Ingka Centres, the real estate development arm of the Ingka Group, of which Ikea Retail is also part. “More people are moving to the city, and the best thing is to be closer to them. But you cannot run a 400,000-square-foot store in the middle of a city.”

In 2018, Ingka (which owns and operates 46 malls and centers in Europe and Asia) introduced an $8.6 billion plan to upgrade its portfolio, invest in new digital initiatives, and build urban centers. The first, now under construction in the Hammersmith section of West London, is set to open in April. Just last month, Ingka announced it had purchased 945 Market Street in San Francisco as the site of the next.

“There are about 40 to 45 cities we’ve identified globally where we could open these centers, to be anchored by Ikea stores running between 50,000 and 80,000 square feet,” Groener said. “We’ve found we could buy bigger buildings in these cities—they could be an old mall or a post office—and redevelop them into what we are calling ‘meeting places.’”

Ingka is now at work with San Francisco city officials looking into zoning restrictions and community needs to determine what the roster of tenants might be at what is now known as The 6 X 6 Building,

“We want to determine what the authenticity of this place is. What will serve the community, as well as generate income and drive people to Ikea. It could be different at every one of these meeting places we create,” Groener said.

Because Ikea stores will serve as the lead anchors of these city centers, Groener allowed that co-anchors are likely to be D-I-Y stores and supermarkets. U.S cities highest on Ingka’s list for establishing meeting places are New York, Chicago, Los Angeles, and Washington, D.C.