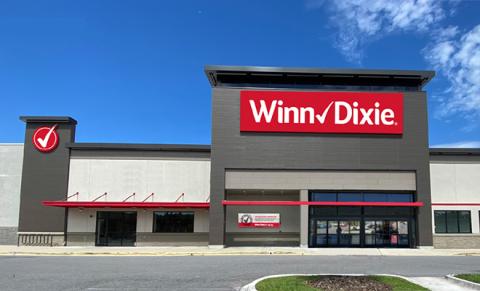 Winn-Dixie is expanding its store footprint in its home state.

Southeastern Grocers, parent company of Bi-Lo, Fresco y Más, Harveys Supermarket and Winn-Dixie grocery stores, announced plans to open four Winn-Dixie stores throughout Florida on Nov. 11. Three of the stores — in Boynton Beach, Jacksonville and Lakewood Ranch — were converted from Earth Fare to the Winn-Dixie banner. (In April, bankrupt Earth Fare sold some store leases to Southeastern.). The fourth, in Gainesville, is a former Lucky’s Market.

The four openings are the first of eight new Winn-Dixie stores throughout Florida. The retailer will open new locations in Ft. Myers, Lake Mary and Melbourne later this year, with a store opening in Viera in early 2021. This expansion follows the February opening of a new Winn-Dixie store in the grocer’s hometown of Jacksonville in response to the local city and community request to combat an impending food desert in the Brentwood community with the closing of a Publix store.

Southeastern Grocers said it will introduce new signature categories throughout the four Winn-Dixie stores opening in November with a wide product selection and specialty items in each department. The grocer is also expanding its “sip and shop” offering with the addition of a fifth WD’s Taproom in the new Gainesville store

“We’ve expanded our product assortments in these new stores to ensure our customers have fresh, quality products at the right price for every meal,” said Anthony Hucker, president and CEO, Southeastern Grocers. “As we expand our footprint, we are able to support more communities throughout Florida and be the grocer our customers and communities can always count on.”