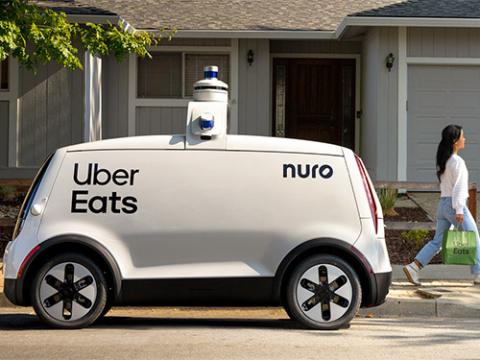 Uber is entering a multi-year partnership with a provider of self-driving electric vehicles for food delivery in the U.S.

The Uber Eats on-demand delivery subsidiary of Uber is teaming up with autonomous vehicle manufacturer Nuro to let Uber Eats consumers order meals and goods delivered by Nuro’s zero-occupant autonomous delivery vehicles, which run on public roads and are built specifically to carry food and other goods.

The partnership will kick off in fall 2022 with deliveries in Houston and Mountain View, Calif. Uber and Nuro plan to expand the service to the greater Bay Area.

This is the latest step in Uber’s rapidly expanding push to deliver food via autonomous vehicles. In May 2022, the company announced it was conducting two separate pilots of two different autonomous delivery vehicles in the Los Angeles area.

One involves end-to-end food deliveries for customers in Santa Monica, Calif. using Motional all-electric, self-driving Ioniq 5 “robotaxis.” Participating retailers will receive a notification when the vehicle arrives, meet it at a designated pick-up location, and place the order in a specially-designed compartment in the backseat.

Upon arrival at the drop-off location, the customer will receive an alert, securely unlock the vehicle door via the Uber Eats app, and collect their order from the backseat. The pilot will allow Motional and Uber to study the integration of their technologies, consumer demand, the user interactions with the vehicle, as well as additional features that may be needed to enable autonomous deliveries.

Nuro was the first company to achieve fully autonomous vehicle operations in three states (Arizona, California, and Texas), and also the first to obtain an autonomous deployment permit from the California Department of Motor Vehicles. It is one of only three companies to be granted the permit to date.

“Nuro and Uber share a vision in which technology can make everyday life just a little bit easier,” said Noah Zych, global head of autonomous mobility and delivery at Uber. “Nuro’s distinctive autonomous vehicles are a great match for the Uber platform, and this partnership will bring a compelling combination of innovation alongside the convenience, affordability and reliability our customers and merchants have come to expect.”

“Our partnership with Uber underscores Nuro’s track record of partnering with the world’s leading brands to make autonomous delivery a seamless experience,” said Cosimo Leipold, head of partnerships at Nuro. “With our unique autonomous delivery vehicles and Uber’s phenomenal scale and reach, we can expand food delivery options from your favorite local mom-and-pop restaurants all the way to nationwide chains.”

Uber Eats leverages Uber’s technology and logistics capabilities to partner with 825,000 retailers in more than 11,000 cities globally, with an average delivery time the company says is under 30 minutes.