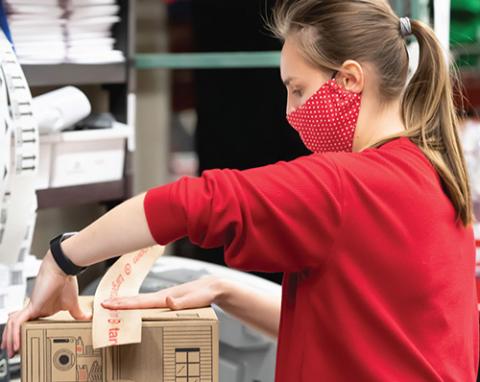 Target Corp. laid out its holiday staffing plans for a holiday season that it said “will be unlike any other.”

The discounter plans to hire roughly the same number of holiday staffers this year as last, but it is shifting its approach to the roles they will play. Last year, Target hired some 130,000 seasonal workers across its stores and supply chain.

For holiday 2020, the retailer is doubling the number of employees focused on curbside and in-store order pickup, and training additional employees to help during the busiest times. (Target noted that more than 90% of its digital orders are fulfilled at stores.) It also plans to hire more distribution center holiday employees this year than last.

In addition, Target is adding more front-of-store employees to enhance safety through tasks that include disinfecting carts and providing masks to shoppers.

The company also plans to give its existing workers the chance to work additional hours, along with providing them with back-up training to work in higher-demand areas of the store they aren’t usually assigned to.

“Throughout the year, the team has successfully balanced strong demand in our stores with surging digital volume,” said Melissa Kremer, chief human resources officer, Target. “Knowing that the holiday season will be unlike any other, we’re building in even more flexibility to make sure Target remains a safe and convenient place to work and shop, while investing in our team’s industry-leading pay and benefits.”