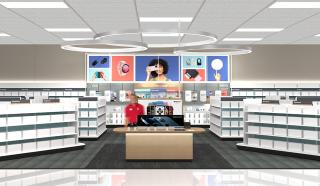 Target is expanding its in-store Apple shops from 17 stores to 36.

Target Corp. is doubling down on Apple.

The discounter said that it will expand the number of its in-store Apple shops from 17 stores to 36 in time for holiday shopping. The shops are staffed by Apple-trained Target tech consultants and feature a wide range of Apple products.The new locations Target include nine stores in Texas, seven in Florida and three in Minnesota,

Also in time for the holidays, Target is expanding its private electronics brand, Heyday, introducing nearly 150 new items, including wireless headphones, speakers, ring lights and keyboards. Most of the items are priced at $29.99 or less.

“The strength of our assortment of national and owned brands, the expertise of our team members and the incredible value we offer make Target an unmatched destination for electronics and accessories,” said Nikhil Nayar, senior VP, hardlines, Target. “With the expanded Apple at Target shop-in-shop experiences, we’re elevating this even further. And coupled with the added convenience of our same-day fulfillment services and new price match guarantee all season long, guests know they can turn to Target with confidence during the holidays, whether that’s in store or online.”

Target’s other main shop-in-shop partner is Disney. In August, Target announced it was expanding its partnership with the entertainment giant, with plans to triple the number of Disney shops in its stores to more than 160 Target locations by the end of the year.