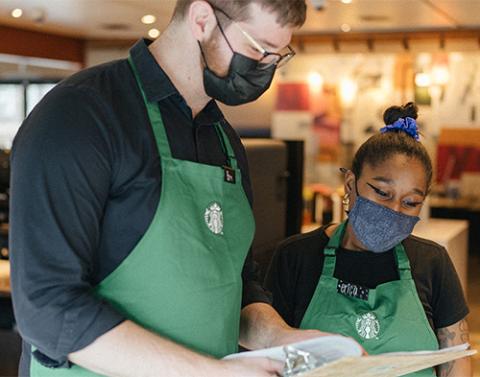 All Starbucks hourly employees will make at least $15 an hour in summer, with an average of $17 per hour.

Starbucks is raising pay for U.S. employees as the company deals with a labor shortage and a union challenge.

The coffee giant will raise wages at least twice in 2022, bringing its average pay to nearly $17 an hour.In late January, employees who have worked at the company for at least two years could receive a raise of up to 5%. Employees with at least five years experience could receive up to a 10% raise.

Additionally, in summer 2022, Starbucks’ average pay for all U.S. hourly partners will be nearly $17 an hour. The increases will bring Starbuck’s wage floor to $15 per hour but, based on tenure and location, some employees could earn as much as $23 an hour. Starbucks average hourly pay is $14 an hour. Last December, the company said it would increase its pay to $15 an hour during the next three years.

Including wage and benefit increases throughout the pandemic, Starbucks estimated the increases total "approximately $1 billion in incremental investments in annual wages and benefits over the last two years."

In addition, Starbucks is added recruiting specialists across all U.S. markets and is extending its $200 referral bonuses to help attract new employees. The company is also investing in store employee training, including a complete redesign of its “Barista Basics” guide to include added training time for all roles as well as practice shifts. Starbucks is also looking to expand beyond its 40 “highly successful” training stores. The stores are dedicated entirely to training employees in this area.

In other moves, Starbucks is:

• Testing a “shifts app” designed to make it easier for employees to work available shifts that meets their needs; and

“Our founder Howard Schultz believed in the dignity of the human experience, in building a successful company, and that our success should always be shared,” said Rossann Williams, Starbucks executive VP, president North America. “These new investments show the continued commitment we all have to creating the best opportunities and experience for our partners.”

Starbucks’ wage hikes come as the chain finds itself confronted with a unionization effort in New York. In August, Starbucks employees from three locations in Buffalo, New York, petitioned the National Labor Relations Board for a vote on whether to unionize. Starbucks is seeking to persuade the labor board to require that workers at all 20 Buffalo-area stores take part in the election instead of allowing stores to vote individually, the New York Times reported. Currently, none of Starbucks’ U.S. corporate-owned stores are unionized.