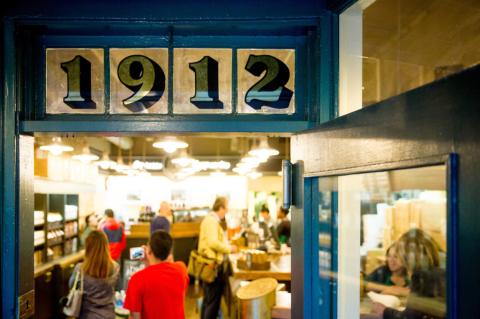 Starbucks is going back to the future — and the past.

The coffee giant will revamp three of its most iconic and most visited Seattle stores — including the original Starbucks at Pike Place Market — as part of its “Heritage Market” initiative.   The three locations will offer customers an elevated experience, “steeped in the rich history of coffee, culture and connection that is synonymous with Starbucks,” the company said.

The other two stores in the initiative are located at First Avenue and Pike Street, and at First Avenue and University Street. The Pike St. store will undergo slight renovations with planned upgrades and enhancements for a heritage-inspired design with a nod to the “mercantile spirit” of Starbucks' hometown roots.

The University Street location, which opened last year, is home to Starbucks’ newest store concept, Starbucks Pickup. It is designed for customers who order ahead and pay in the Starbucks app.

“Together, these three distinct locations in Starbucks' hometown of Seattle represent the company’s historic past, present, and its re-imagined future,” Starbucks said.

The Heritage Market comes several months after Howard Schultz returned to Starbucks as interim CEO. In May, the chain announced $1 billion in additional employee and store investments this year.

Starbucks employees had to reapply for their positions at the three Heritage stores. The selected workers will go through additional training and receive an “elevated pay structure.” (The employees at the three stores who decided not to reapply or were not selected will continue to have employment with Starbucks at other stores.)

“This newly created Heritage Market offers new ways for partners to grow their career at Starbucks,” the company said. “It was through the direct feedback from partners that the concept was born. At these stores, partners not only encompass the timeless role of the barista, but they also hold a high responsibility of brand stewardship, coffee leadership and excellence in customer engagement.”