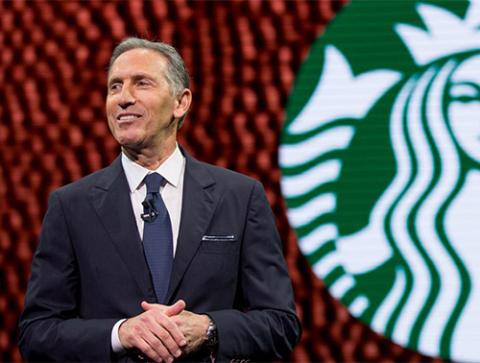 Howard Schultz will continue as interim CEO into Q1 2023.

Interim Starbucks CEO Howard Schultz will be sticking around for a little while.

The Starbucks Corp. board of directors has reached an agreement with Schultz that will see him remain as interim CEO through the first fiscal quarter of 2023. According to the coffee giant, this timeline provides it a runway for a seamless transition and continuity of leadership through the 2022 holiday season.

Schultz initially returned as interim CEO of Starbucks on April 4, 2022. On his first day back at the helm of the company he grew into a global coffee café giant, Schultz announced that Starbucks is suspending its stock buyback program — effective immediately — to invest back into operations, including employees and stores. (In March, Starbucks said that Schultz would return to the company as interim chief executive officer and a board director in the wake of the resignation of Kevin Johnson, effective April 4.)

During Schultz’s previous four decades as CEO and chairman, the company grew from 11 stores to more than 28,000 stores in 77 markets around the world. During his tenure, Starbucks delivered a 21,000% gain in the value of its stock price between its initial public offering in 1992 and Schultz's departure as CEO in 2017.

Schultz gets off to an active start
Since returning as interim CEO, Schultz has dealt with issues including an increased push for unionization by Starbucks store associates. Schultz, an outspoken progressive on most issues, has made no secret of his opposition to the burgeoning union drive at Starbucks. In response, Starbucks plans to spend $1 billion on wage hikes, improved training and store innovation during fiscal 2022, which ends in the fall for the chain.

The company has also publicized plans to utilize Web 3.0 technologies to establish a strong foothold in the emerging metaverse, and committed to expanding its U.S. health care benefit to cover eligible travel expenses for employees seeking abortions or gender-affirming procedures when the services are not available within 100 miles of the employee’s home.

In addition, in a late May a statement to employees, Starbucks announced that it has made the decision to exit and no longer have a brand presence in Russia.  Starbucks has 130 locations in the country, with all of them licensed. Starbucks, which has been operating in Russia for 15 years, initially announced on March 8, 2022 that it would pause all business activity there, including the shipment of all Starbucks products, due to the Russian invasion of Ukraine.

In the most recent major move under Schultz’s tenure, Starbucks entered into an agreement to sell its Evolution Fresh cold-pressed premium juice brand to Bolthouse Farms. The company bought Evolution Fresh for $30 million in 2011.

As the next chief executive is named to the position, he or she will undergo full immersion into the company, collaborating with Schultz directly. Driving toward an announcement planned for fall 2022, the official handoff will take place in the first calendar quarter of 2023. Thereafter, Schultz will remain on the Starbucks board.