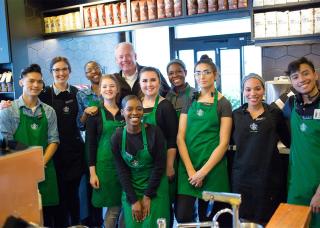 Kevin Johnson will step down as CEO of Starbucks on April 4.

A familiar face is returning to lead Starbucks Corp. — on an interim basis.

Starbucks Corp. on Wednesday said that president and CEO Kevin Johnson, 61, will retire after 13 years with the company, effective April 4. Johnson, who had led the coffee giant since 2017, will serve as a consultant to the company and its board through September.

Howard Schultz, the founder and former CEO of Starbucks, will return to the company as interim CEO and will also rejoin the Starbucks board. Schultz, who will be compensated $1 for his work, will also assist the company with its search for a new CEO and help onboard the new leader.

Also on Wednesday, Starbucks said that it plans to expand to approximately 55,000 company-operated and licensed stores across 100 markets by 2030. As of January 2, 2022, the company has 34,317 stores across the globe, of which 51% and 49% were company-operated and licensed, respectively. Stores in the U.S. and China comprised 61% of the company’s global portfolio, with 15,500 and 5,557 stores, respectively.

Starbucks said its board has been engaged in CEO succession planning, assisted by Russell Reynolds Associates, since 2021. The company expects to appoint a new leader by the fall.

In a statement, Johnson said that he told the board a year ago that, as the global pandemic neared an end, he would be considering retirement from Starbucks.”

“I feel this is a natural bookend to my 13 years with the company,” he added. “As I make this transition, we are very fortunate to have a founder who is able to step in on an interim basis, giving the board time to further explore potential candidates and make the right long-term succession decision for the company.”

In a statement, Schultz said that although he did not plan to return to Starbucks, “I know the company must transform once again to meet a new and exciting future where all of our stakeholders mutually flourish.”

“When you love something, you have a deep sense of responsibility to help when called,” he said. “Our success is not an entitlement. We must continue to earn the trust of our people and our customers every day by how we deliver the Starbucks Experience, how we treat each other and how we act as a responsible community member and corporate citizen.”

The leadership transition comes as Starbucks is facing a growing union drive by employees at its U.S. stores. According to SBWorkers United, more than 120 Starbucks stores in 26 states have filed union petitions with the National Labor Relations Board (NLRB). Recently, a federal labor board accused Starbucks of unlawfully retaliating against two employees in a Phoenix, Arizona Starbucks location for trying to unionize their store.

On Tuesday,  Starbucks received a letterform  a coalition of more than 75 shareholders, including  Trillium Asset Management, urging the chain to make changes in how it deals with growing unionization efforts.  In the letter, the shareholders cited growing public support for unions and recommended that Starbucks stop anti-union communications with employees and commit to negotiating with unions in good faith.