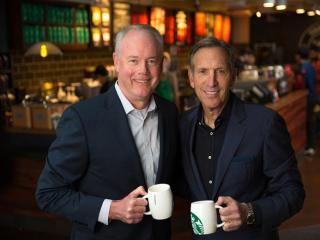 Howard Schultz is leaving his post as CEO of the company he built into a global coffee empire, but he’s not retiring.

Schultz will step down as CEO of Starbucks Corp. on April 3, at which time he will be appointed executive chairman and shift his focus to the company’s new upscale initiatives — the design and development of Starbucks Reserve Roasteries around the world and the expansion of the Starbucks Reserve retail store format — along with its social impact programs.

Schultz will be succeeded as chief executive by Starbucks’ president and COO Kevin Johnson. Johnson, a close friend of Schultz, has a strong technology and operations background.

“As I focus on Starbucks next wave of retail innovation, I am delighted that Kevin Johnson — our current president, COO, a seven-year board member and my partner in running every facet of Starbucks business over the last two years — has agreed to assume the duties of Starbucks chief executive officer,” said Schultz, who will continue to serve as chairman of the board. “This move ideally positions Starbucks to continue profitably growing our core business around the world into the future.”

Schultz is widely regarded as one of the nation’s most politically outspoken and high-profile executives. In recent years, he has taken very public and progressive stands on such issues as gun control, gay rights and student debt.

Although Schultz has denied it in the past, his stepping down as CEO is likely to cause renewed speculation that he will eventually run for public office. He has a close relationship with President Barack Obama and supported Hillary Clinton in the recent election. In his staff letter on Nov. 9, he described himself as “stunned” by the results.

Starbucks’ new incoming CEO, Johnson, joined the Starbucks board in 2009 and the management team in 2015. As president and COO, he led the company’s global operating businesses across all geographies as well as the core support functions of Starbucks' supply chain, marketing, human resources, technology, and mobile and digital platforms.

Johnson’s pre-Starbucks career includes 16 years at Microsoft and five years as CEO of Juniper Networks. At Microsoft, he led worldwide sales and marketing and became the president of the platforms division.

This will not be the first time Schultz has stepped down as CEO. He had previously served in the role from 1987 to 2000, but he returned to the position in 2008.
Advertisement