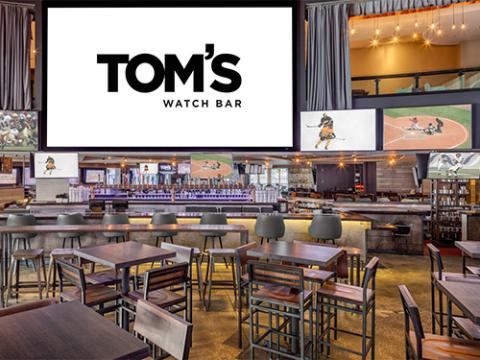 A brand known for its “360-degree” viewing room is targeting “ultra-high” traffic locations as it expands nationwide.

Denver-based Tom’s Watch Bar has concluded a $30 million fundraising and partnership with Sagard Credit Partners. Tom’s, owned by SIF Partners which provided the initial equity capital, said it will use the capital to open locations across the country.

The company currently has five locations and eight new ones in construction. It also is negotiating 10 LOIs for new venues for the second half of 2023.

With a tag line of “All the Sports, All the Time,” Tom’s Watch Bar features a central oversized "stadium" screen that is surrounded by hundreds of high-definition screens, providing 360-degree viewing and making every seat “the best seat in the house,” the company said. Customers have the option to enjoy premium sound or personalize their sound and listen to the play-by-play for their favorite game. Tom's also offers games, contests and prizes during the games.

Tom’s Watch Bar was co-founded by Tom Ryan, co-founder of burger chain Smashburger. It started out, in 2012, as a full-service restaurant called Tom’s Urban and was relaunched as a next-generation sports bar under its current banner in 2019.

"Tom's Watch Bar is excited for the opportunity to partner with Sagard Credit Partners for the continued growth of our innovative sports bar concept, with the goal of making every seat the best seat in the house,” said Ryan.