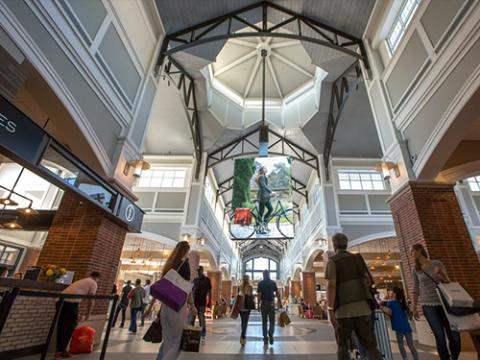 A new addition at Simon's Woodbury Common Outlet in New York's Hudson Valley will take its GLA over a million sq. ft.

This coming Saturday and Sunday are National Outlet Shopping Days, so what better time for Simon Premium Outlets to announce three new centers under development.

A high-end luxury Premium Outlet is destined for the high-income southern portion of the Nashville metro from Simon and Adventurous Journeys Capital Partners. The 300,000-sq.-ft outlet will be patterned after Simon’s Woodbury Common location in New York and its Desert Hills center in Center in California.

The nation’s premier mall operator will also resume development of planned outlets in Los Angeles and Tulsa. Simon has reached an agreement in principle with the city of Carson, Calif., to complete a 400,000-sq.-ft, high-end fashion outlet and value-oriented center alongside the I-405 freeway, just 11 miles from LAX airport.

Simon will bring its version of value-oriented shopping to Oklahoma with Tulsa Premium Outlets, a planned 330,000-sq.-ft. development located off I-75 along Riverside Parkway in 2022.  This, too, is a development resumption that looks toward a 2024 completion date.

Further expansion will soon be underway at Woodbury Common Premium Outlets in New York’s Hudson Valley, considered the premier outlet center in the nation with some 13 million visitors from all over the world. The planned 160,000 sq. ft. addition will take gross leaseable area at Woodbury over a million sq. ft.