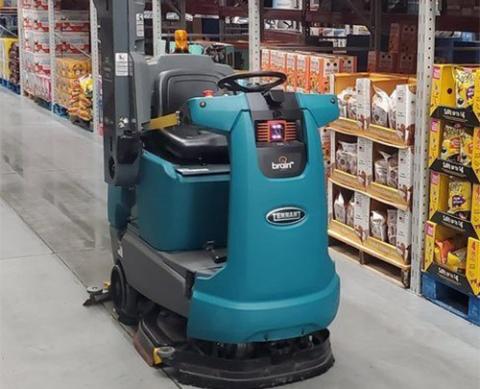 Sam's Clubhas completed a national, chainwide rollout of inventory scan towers that have been added to its existing fleet of robotic scrubbers. The company is partnering with artificial intelligence (AI)- based robotic platform provider Brain Corp. in the initiative.

The towers run on Brain Corp's BrainOS AI operating system.Once installed on the scrubber, the cloud-connected inventory scan tower captures data as it moves autonomously around the club. The tower can capture and report real-time data such as product localization, planogram compliance, product stock levels, and verification of pricing accuracy, eliminating the need for manual processes and improving accuracy and efficiency.

Sam’s Club parent Walmart has been using BrainOS-powered automated scrubbers in at least 1,800 stores across the U.S. since 2019. The deployment of inventory scan towers at Sam’s Club marks the first commercial application of Brain Corp.’s inventory scanning technology anywhere in the world.

“Our initial goal at Sam's Club was to convert time historically spent on scrubbers to more member-focused activities. Our autonomous scrubbers have exceeded this goal. In addition to increasing the consistency and frequency of floor cleaning, intelligent scrubbers have empowered associates with critical insights," said Todd Garner, VP, in-club product management, Brain Corp. "At Sam's Club, we have a member-obsessed culture. These scrubbers help associates ensure products are out for sale, priced correctly and findable, ultimately making it easier to directly engage with our members."

"The speed and efficiency of the deployment of this next-generation retail technology with Sam's Club is a testament to the strength of our team," said David Pinn, CEO at Brain Corp. "Through the use of Inventory Scan, Sam's Clubs across the country are able to access a trove of critical inventory data in real time, which they can use to better inform decision making, run their clubs more efficiently and provide a better in-club experience for their members."

Sam's Club, a division of Walmart Inc., is headquartered in Bentonville, Ark. and operates nearly 600 stores in the U.S. and Puerto Rico.