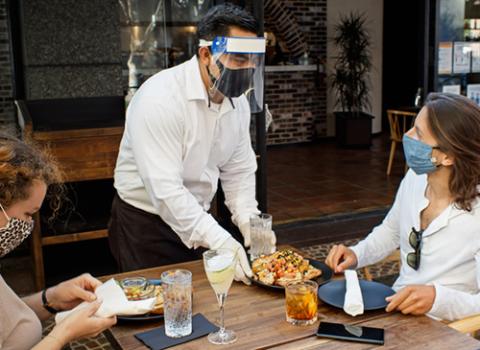 The tide of restaurant closures and bankruptcies continues to rise amid the pandemic.

The National Restaurant Association has sent a letter to Congressional leadership in which it argues that the entire industry needs a 'down payment' relief bill to make it to the new year.

The letter featured findings from a survey conducted in late November by the NRA of 6,000 restaurants and 250 supply chain businesses that revealed continued business deterioration across the restaurant industry. In the letter, the NRF offered support for the moderate compromise proposal as a 'down payment' toward a larger relief package in early 2021.

In the survey, 87% of full-service restaurants (independent, chain, and franchise) report an average 36% drop in sales revenue. For an industry with an average profit margin of 5%-6%, this is simply unsustainable, according to the NRA. Eighty-three percent of full-service operators expect sales to be even worse over the next three months.

Other findings are below.
•    As of Dec.7, 17% of restaurants—more than 110,000 establishments—are closed permanently or long-term.

•    The vast majority of permanently closed restaurants were well-established businesses, and fixtures in their communities. On average these restaurants had been in business for 16 years, and 16% had been open for at least 30 years.

•    Only 48% of these former restaurant owners say it is likely they will remain in the industry in any form in the months or years ahead. Our nation is losing a generation of industry talent, knowledge and entrepreneurial spirit.

•    Fifty-eight percent of chain and independent full-service operators expect continued furloughs and layoffs for at least the next three months.

•    Although sales are significantly lower for most independent and franchise owners, their costs have not fallen by a proportional level. Fifty-nine percent of operators say their total labor costs (as a percentage of sales) are higher than they were pre-pandemic.

"What these findings make clear is that more than 500,000 restaurants of every business type—franchise, chain, and independent—are in an economic free fall," Sean Kennedy, executive VP for public affairs, NRA, said in the letter. "And for every month that passes without a solution from Congress, thousands more restaurants will close their doors for good."

"In short, the restaurant industry simply cannot wait for relief any longer," Kennedy continued. "We appreciate the efforts of a group of moderate members of the House and Senate to advance a true compromise between the competing proposals from Democratic and Republican leaders. If this moderate plan represents a 'down payment' for a larger relief package in early 2021, it will provide restaurants with immediate relief to hold on through the most dangerous point in our business year."

In addition to the support of the compromise proposal, the association provided a plan for how a proposed second draw from the Paycheck Protection Program (PPP) could be strengthened to reflect the unique business model of the restaurant industry and highlighted other important measures in the proposal that would support restaurants in the short-term.