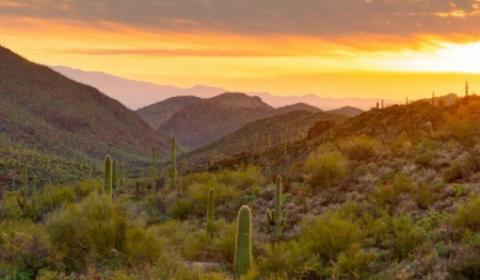 This untouched piece of land in Phoenix's West Valley will be fashioned into a community of 300,000 people.

HHC and Colangelo’s development company, JDM Partners, envision their $600-million-dollar acquisition to emerge as a vital community and business center that will sit alongside Interstate 11, a proposed north-south freeway that has received Congressional approval and will connect Phoenix, Las Vegas, and Southern California. The new highway will likely follow the route of US 93, and some transportation analysts foresee it as becoming a new trade route uniting Canada and Mexico.

"The launch of Douglas Ranch is momentous news for Phoenix and the state of Arizona,” said Colangelo, the former owner of the Phoenix Suns and Arizona Diamondbacks who is one of the largest owners of entitled land in Arizona.

“We are creating a city of the future, leveraging The Howard Hughes Corporation's development expertise to build a community with limitless potential to spur growth, business expansion, economic opportunity and innovation," Colangelo said.

With Douglas Ranch in its portfolio, HHC will operate the country's largest collection of master-planned communities, encompassing more than 100,000 acres. Its others include including Summerlin in Las Vegas, and The Woodlands in the Greater Houston area.

"The characteristics of this community are vastly similar to HHC's other MPCs across the country with a prime location, strong demographics in a thriving job market, high barriers to entry, and limited competition," said Howard Hughes CEO David R. O'Reilly. “Phoenix's West Valley is the ideal location for people and businesses looking to thrive for generations to come."

Phoenix has added almost a million residents in the last decade and is expected to grow by approximately 100,000 residents annually over the next 10 years, according to HHC. New home construction in the West Valley has been rising at a rate of more than 8% a year.