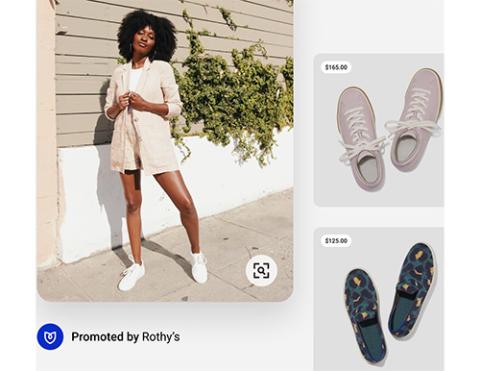 Initially launched in the U.S. in May 2020, the Shopify Pinterest channel is now live in countries including Australia, Austria, Brazil, France, Germany, Italy, Spain, Switzerland, and the U.K. Shopify retailers in these countries can turn their goods into shoppable product pins that are discoverable across the platform.

For the first time, Shopify retailers also have access to Pinterest dynamic retargeting, which enables them to re-engage with consumers who have already expressed interest in their products on Pinterest.

Pinterest is also launching multi-feed support for catalogs, a new feature allowing businesses to more easily upload their products in multiple product feeds within the same Pinterest business account. Shopify retailers, as well as any retailer with a Pinterest business account, are now able to add up to 20 product feeds to their account, each indicating specific local data such as a currency, language or product availability.

Retailers can also upload a specific feed for each market they sell products in, as well as upload feeds to serve different advertising strategies such as prospecting or retargeting.

“Pinterest is an inspiring place to shop and we're excited to expand our partnership with Shopify to help merchants in 27 more countries grow their shopping presence on Pinterest globally,” said Bill Watkins, global head of mid-market and small business sales at Pinterest. “With the retail ecosystem profoundly evolving over the past year, we’re committed to supporting merchants of all sizes by providing them with a quick and easy access to our shopping features without the need to edit code or deploy resources so they can inspire consumers for what to do or buy next.”

“Discoverability is top of mind for Shopify merchants—and social commerce has been a driving factor in helping independent businesses build meaningful audiences, particularly throughout this last year when we saw installs of our social commerce channels grow 76%,” said Lola Oyelayo-Pearson, director of user experience, channels and financial services at Shopify. “Expanding the Pinterest channel globally will mean that the more than 1.7 million merchants using Shopify can tap into the purchasing power of over 450 million Pinterest users by building thoughtful, targeted marketing campaigns.”

Shopify retailers including PDPAOLA, Rothys, Jennifer Fisher and Sukoshi Mart have already been using the Pinterest app on Shopify.