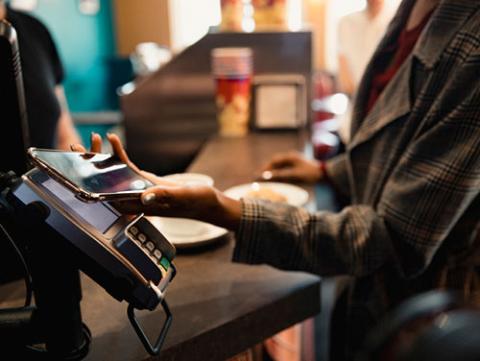 Mobile and contactless payments are gaining popularity amid consumer concerns over touching surfaces during the pandemic.

Two-thirds (67%) of retailers surveyed now accept some form of no-touch payment, according to the 2020 edition of “The State of Retail Payments” study, conducted for the National Retail Federation every other year by Forrester. The total includes 58% that accept contactless cards that can be waved past a card reader or tapped on the reader (up from 40% the prior study) and 56% that take digital wallet payments on mobile phones (up from 44%).

Since January 2020, no-touch payments have increased for 69% of retailers surveyed. Among retailers that had implemented contactless payments, 94% expect the increase to continue over the next 18 months. As of the time of the survey, 19% said no-touch accounted for more than half of their in-store transactions, while 30% said it was 10% or less.

According to the joint research, higher costs, including fees for processing transactions, are the top concern for 67% of retailers that accept no-touch payments. Following are cybersecurity and data privacy risks at 65%, increased fraud at 63%, and increased chargebacks of disputed purchases at 61%.

Among U.S. consumers, 19% surveyed said they made a digital payment in a store for the first time in May 2020. Of those, 62% used their phone and 56% used a contactless card. And 67% said they were satisfied with the experience, while 57% would likely continue once the pandemic has subsided.

“Health experts say there is no clear evidence that COVID-19 is transmitted by cash or credit cards but retailers are putting health and safety first and have rolled out a variety of no-touch payment options in order to err on the side of caution,” said NRF VP for government relations, banking and financial services Leon Buck. “While mobile payments and contactless cards have accounted for a minority of payments in the past, the pandemic has clearly driven consumers to change their behavior and retailers to accelerate their adoption of the technology.”