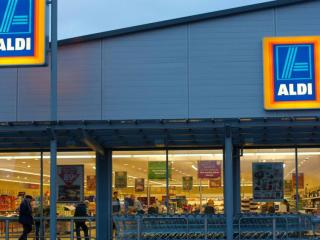 Healthy checklanes free of bad-for-you impulse items are coming to nearly all Aldi stores by year end, and that’s just the beginning of the retailer’s stepped up commitment to offering healthier options at its expanding network of 1,500 stores.

Aldi isn’t shooting itself in the foot and getting rid of all impulse items from its checklanes, but rather re-merchandising select checkout lanes to feature healthier options such as single serving of nuts, trail mixes, dried fruits and granola bars.

"By introducing Healthier Checklanes and through a number of other initiatives, we are doing our part to remove temptation at checkout and stocking stores with even more nutritious options," said Aldi CEO Jason Hart. He contends Aldi truly cares about its customers and is responding with guilt-free checkout zones and increased food options customers can feel good about.

The new merchandising initiative follows a major product re-formulation effort last year and comes as Aldi prepares to enter the California market in March with the first of a planned 45 locations expected to be open by year end.

The company said it is making changes beyond the checkout too so as to give shoppers access to more better-for-you options. For example, Aldi said proprietary brand products which account for more than 90% of the products it sells are now free of certified synthetic colors, partially hydrogenated oils and added MSG. The company said it has taken the ingredient removal commitment a step further by eliminating artificial growth hormones from the milk used to make cultured products, such as yogurts, sour cream and cottage cheese. The milk Aldi sells has been free of hormones for years, according to the company.

In addition, Aldi said it broadening its product offerings within every aisle, further evidence of the mainstreaming of the fresh, natural and organic movement that drove Whole Foods growth and served as the source of recent strength at Kroger.

Aldi said it is expanding is its selection of fresh and organic meat and produce, including the “Never Any!” brand of meat products that contain no added antibiotics, hormones, animal by-products or other additives. The company also plans to expand its SimplyNature line of products, free of more than 125 artificial ingredients, as well as a gluten-free line of products sold under Aldi’s brand, liveGfree.

Also of note is a change the company is making to put nutritional facts on the front of its exclusive brand food packages, a move that has been resisted by some food manufacturers who want to preserve label fronts for branding messages.