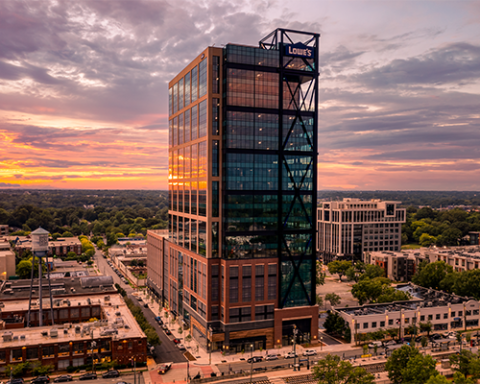 Lowe’s Cos. Inc. is centralizing its technology development activities in a new “center of excellence.”

The home improvement giant has opened a 357,000-sq.-ft. tech hub in the South End section of Charlotte, N.C., close to light rail and other amenities. The company says the new facility is part of its commitment to becoming the most customer-centric omnichannel retailer.

Seemantini Godbole, Lowe’s executive VP, chief digital and information officer, and her team will be on site. The hub will employ up to 2,000 tech jobs and is currently hiring for roles such as data engineers, user experience specialists, and project managers.

Lowe’s occupies floors eight to 25 of the building with its workspace floors arranged in a series of 12 flexible “pods” with moveable furniture, designed to inspire collaboration. The Hub also features an auditorium seating 168 people, a large multipurpose collaboration room, an innovation lab, relaxation spaces, and game and social hub spaces.

Floor 25, or the “top of the tower,” includes an event and activity space that opens onto a rooftop terrace with a view of the Charlotte skyline. Lowe’s levels are interconnected by a custom-designed, four-story staircase.

According to Lowe’s, the facility is designed around four creative pillars: to build an environment that promotes innovation, attract and retain top technology talent, prove that technology advancements evolve the Lowe’s brand, and energize the community by sharing Lowe’s commitment, passion, and culture.

Lowe’s says it will utilize the new tech hub to continue to explore how it applies emerging technology to its business. One specific project the company has publicly said it will continue managing at the facility is its interactive virtual model, or “digital twin,” it has created two of its stores.

The home improvement giant is leveraging technology from Nvidia to create photorealistic digital replicas of the stores to enable store employees to visualize and interact with nearly all of a store's digital data. Built by Lowes Innovation Labs team and leveraging Nvidia’s Omniverse metaverse environment, Lowe’s digital twin is currently live in two stores (in Mill Creek, Wash., and Charlotte, N.C.).

Lowe’s digital twin solution is a completely virtual replica of the physical home improvement store. It fuses spatial data with other Lowe's data, including product location and historical order information, and unites it all into a visual package that associates can gain access to on a range of devices, including desktop computers and Magic Leap 2 augmented reality (AR) headsets.

The company is also developing its end-to-end room scanning, measurement and estimate tool called “Measure Your Space” at the facility. Customers can leverage the feature in the Lowe's iOS app.

The app guides customers to scan a room, automatically generating a floor plan, room measurements and a personalized estimate. have access to this information in their app from any location, including at home and in the store.

iPhones and iPads with the LiDAR ((light detection and ranging) scanner use purpose-built sensors and software to sense depth and map dimensions of a space and the objects in it. Lowe's new tool will leverage this technology to get detailed room measurements. The tool is currently in beta for flooring products.

Media reports indicated Lowe’s was planning to build a tech hub facility as far back as 2019, when the company was said to be considering placing it in either Dallas or Charlotte.

Based in Mooresville, N.C. (which is near Charlotte), Lowe's Cos. Inc. operates more than 2,200 home improvement and hardware stores.