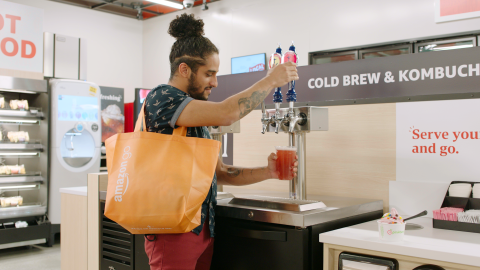 Amazon Go is reinforcing its presence in the suburbs of the Greater Los Angeles metro area.

Amazon has been broadening the portfolio of its Amazon Go checkout-free convenience concept with a new format for suburban locations. The latest location for the new format, which is still called Amazon Go, is the Los Angeles suburb of Woodland Hills, Calif.

‘Just Walk Out’ with purchases

The new Amazon Go location features Amazon’s “Just Walk Out” technology, and is designed to offer customers a quick shopping experience to pick up grab-and-go food, snacks and beverage items and a few everyday essentials.

The retailer’s Just Walk Out technology leverages a combination of computer vision, sensor fusion and deep learning that enables shoppers to shop the store, pick out what they want and skip the checkout when they’re done. When shoppers arrive, they open the Amazon app, tap “In-Store Code,” and scan in with the QR code presented.

Spreading in the suburbs

The Amazon Go suburban format debuted at a store in Mill Creek, Wash., in April 2022. In September 2022, Amazon Go opened a location in Whittier, Calif. – which is part of the Greater Los Angeles area.

Amazon is seeking Zero Carbon Certification with the International Living Future Institute (ILFI) for the three Amazon Go stores located in California. These stores have incorporated upgrades that help lower energy use and minimize operational carbon footprint, including an all-electric kitchen, water heating and heat pumps for heating and cooling our stores, with no onsite natural gas combustion.

These stores also reduce refrigeration system energy usage by utilizing doored walk-in coolers and freezers to support most of our customer-facing chilled food offerings and use high-efficiency LED lighting throughout the stores.

According to Amazon, implementing upgrades at these three Amazon Go stores will save a combined total of approximately 32 tons of CO2 each year, equivalent to six gas-powered cars driven for one year.

The omnichannel giant is also seeking ILFI zero carbon certification for a same-day fulfillment center in Sacramento, Calif., an Amazon Fresh grocery store in the Seattle area and has achieved the recognition for its Climate Pledge Arena, also in Seattle.

Amazon opened the first Amazon Go in January 2018, in Seattle. The concept has since expanded to 30 locations across the United States, including two “Starbucks Pickup with Amazon Go” locations jointly operated with Starbucks in mid-town Manhattan. In addition, Amazon debuted Amazon Go Grocery, since rebranded to Amazon Fresh, in February 2020; and also operates an Amazon Fresh grocery store in the Ealing section of London.