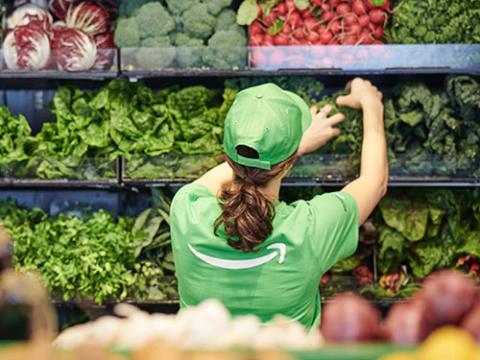 The online giant continues to disrupt the grocery industry with the unveiling of its first checkout-free grocery store, Amazon Go Grocery, which debuted on Tuesday, in the company’s Seattle hometown. (To see a video on the new format, click here.)

The selection at Amazon Go Grocery includes fresh produce, meat, seafood, baked goods, pet supplies and grocery and household essentials as well ready-made dinner options (signed as “Meals Made Easy”) and alcoholic beverages. A mix of organic items and conventional items from familiar brands are featured, along with local favorites from around the city and region. Every item is priced individually, which means that nothing has to be weighed. There is no meat or seafood counter and no on-site food preparation. But there are self-serve coffee and espresso stations.

In many ways, Amazon Go Grocery resembles the smaller-sized, neighborhood grocery stores that supermarket companies have been opening in urban centers. But it stands apart in its use of technology.

Amazon Go Grocery uses the same “Just Walk Out” cashierless technology as Amazon Go, which opened its first store in January 2018 and now has 25 locations.

Customers must first download the Amazon Go app and then scan the QR code from the app on a turnstile at the store’s entry to enter. Once inside, they shop the same as they would at a conventional grocers.

Overhead cameras and shelf sensors, assisted by artificial intelligence, track every item a shopper takes and automatically adds it to the shopper’s virtual cart (if an item is put back, it is automatically removed from the cart). Once the shoppers exits the store, their Amazon account is charged and they are sent a receipt.

Amazon’s interest in expanding further into grocery extends beyond its newest format (and beyond Whole Foods Market). In November, the company listed job openings for a grocery store concept that is expected s to open next year, in Los Angeles. It is reported to be the first location of what is expected to be a new chain of Amazon grocery stores.