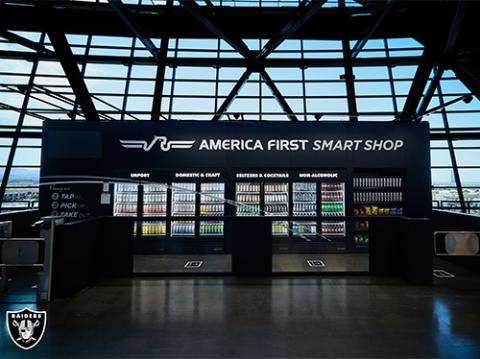 The home stadium of the Las Vegas Raiders NFL football team is operating the stores, which measure an average of 240-sq.-ft., are installed directly into empty concourse spaces in as little as one week. They provide a frictionless shopping experience with the Zippin checkout-free platform. Leveraging the Zippin solution, the stores enable shoppers to tap a credit card to enter and then select the items they want.

Zippin’s artificial intelligence (AI) software automatically identifies the items, using overhead cameras and sensors, and adds them to a virtual shopping cart. The consumer can put the items in their pocket, bag, purse, or simply carry them out, with no checkout required. When they exit, the purchases are automatically charged and a receipt is available online.

According to Zippin, by eliminating checkout lines, its frictionless solution cuts the time it takes to get through concessions to as little as 40 seconds. So far, Allegiant Stadium is reporting ROI metrics including a 66% increase in speed of service,45% increase in sales for the same space (a traditional stand) when compared to 2021, and a more than 30% increase in the number of product SKUs offered.

“Las Vegas is a global destination for sports and entertainment,” said Sandra Douglass Morgan, president of the Las Vegas Raiders. “Deploying these four Zippin Lanes with our partner, Levy, for the start of the NFL season was a large segment of our commitment to constantly improve the fan experience at Allegiant Stadium. The innovative design allows our guests to enjoy the benefits of frictionless shopping, while we experience increased throughput for every event.”

“The frictionless retail economy is gaining momentum as shoppers, fans and travelers demand easier, faster, and more convenient ways to get things done,” said Krishna Motukui, Zippin co-founder and CEO. “We see a big opportunity to maximize underused space in numerous locations from narrow concourses in venues and airports, to high-traffic walkways on college campuses. Zippin Lane is our answer to the surging demand to quickly deploy frictionless retail experiences.”