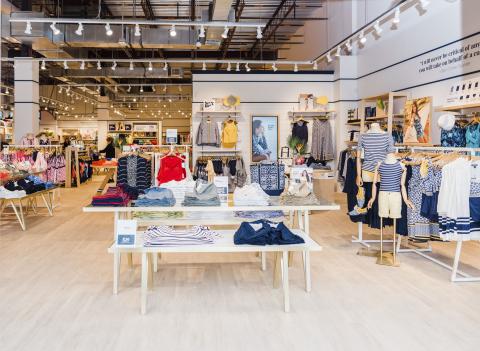 Lands’ End has expanded its partnership with QVC.

Lands’ End is expanding its distribution via third parties.

The apparel brand has made its first appearance on the QVC television channel following a successful test on the video commerce retailer’s online channel. The on-air debut of Lands’ End featured women’s swimwear – inclusive of sizes 2 through 32 and spanning petite, regular, and tall. The brand went live on QVC on Friday, April 15 at 10 a.m., and also made an appearance in the evening along with several other brands.

In addition to QVC, Lands’ End is expanding its partnership with Kohl’s. The brand, whose net revenue increased 14.7% to $1.64 billion in 2021, has a presence in some 300 Kohl’s stores, with its full assortment available on Kohls.com. In 2022, it plans to expand its assortment to an additional 500 Kohl’s stores, CEO James Griffith said on the company’s fourth-quarter earnings calls.

Lands’ End, which also sells merchandise on Amazon, is reported to be working on a deal with Target, according to Women’s Wear Daily.

“We’ve found our third-party platforms and collaborations are an effective way for Lands’ End to build relationships with existing brand fans and connect with new customers, reaching shoppers in channels they might be frequenting,” said Angie Rieger, senior VP, international and wholesale at Lands’ End. “It’s this customer excitement that has driven our unique, third-party approach to shopping Lands’ End and we see it as a clear differentiator for the brand.”

QVC said it has seen key product categories of authority resonate with its shoppers in the past and feels confident that Lands’ End inclusive swim offerings, which are priced the same across all sizes, will also resonate.

“Our e-commerce launch with Lands’ End resulted in impressive customer engagement both within the online shopping experience and socially, especially given the brand’s inclusive offerings, which is an area where we continue to place emphasis here at QVC as well,” said Rachel Ungaro, VP and GM of apparel for QVC US. “Lands’ End has one of the most inclusive swimwear size ranges on the market – a synergy with QVC and the inspiration behind this spring’s on-air product focus. We look forward to seeing our customer’s continued response and the possibility of additional opportunities in the future.”