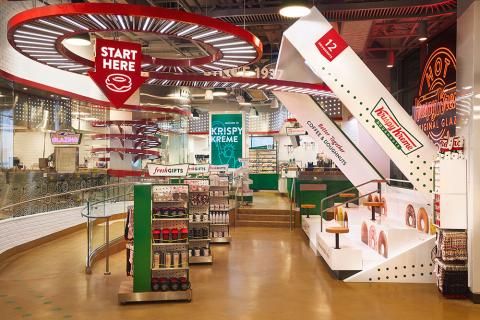 Krispy Kreme Inc. is going public for the second time.

The doughnut chain on Tuesday disclosed its filing for an initial public offering. The number of shares to be offered and the price range for the proposed offering have not yet been determined. Krispy Kreme plans to trade on the Nasdaq under the ticker symbol “DNUT.”

Krispy Kreme previously went public in 2000, but it filed for Chapter 11 bankruptcy some five years later following financial restatements and falling sales at some of its franchises. It went private in 2016 when it was purchased by JAB Holding Company, a private European conglomerate whose food and beverage brands also include Panera Bread, Peet's Coffee & Tea, Caribou Coffee Company, Einstein Noah Restaurant Group and more.

Krispy Kreme, whose roots date back to 1937, operates approximately 1,500 shops in 33 countries. Its goods are also sold in 12,000 U.S. grocery and convenience stores. In addition to its name-branded stores, Krispy Kreme also owns Insomnia Cookies, which it bought in 2018.

“In addition to creating awesome doughnut experiences, we create ‘cookie magic’ through our Insomnia Cookies business (‘Insomnia’), which specializes in warm, delicious cookies delivered right to the doors of its loyal customers (‘Insomniacs’), along with an innovative portfolio of cookie cakes, ice cream, cookie-wiches and brownies,” the company said in its filing.