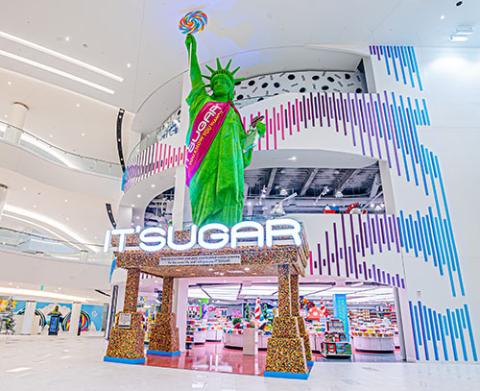 Even the nation’s largest candy store retailer isn’t immune to the pandemic.

It’Sugar has filed for Chapter 11 bankruptcy protection, citing the effects of the pandemic on sales and consumer behavior as well as “the recessionary economic environment.” The filing was announced by BBX Capital Corp., which acquired the retailer for approximately $57 million in 2017.

It’Sugar, which has not yet filed a reorganization plan, said it plans to continue to operate its approximately 100 stores while the bankruptcy proceedings are ongoing. The locations include the company’s largest store, a three-level, 22,000-sq.-ft. space described as the world’s first department store for candy,” which opened in December 2019 at American Dream, the new 3 million-sq.-ft. mega-retail and entertainment center in East Rutherford, N.J.

With sales related to travel and tourism historically representing about 60% of It’Sugar annual sales, the retailer was hard hit by the pandemic. Although it has reopened its stores, the company was not able to get the concessions it needed from landlords and vendors.

“It’Sugar’s liquidity and its ability to sustain its operations were dependent on obtaining significant rent abatements or deferrals from its landlords, amended payment terms from its vendors, and improvement and stabilization of its sales volumes,” said  Jarett Levan, president of BBX Capital Corp. and BBX Capital Florida LLC. “This has not occurred and resulted in the decision to file bankruptcy proceedings. We believe that It’Sugar will be better positioned to successfully navigate the effects of the COVID-19 pandemic upon exiting from bankruptcy.”

While It’Sugar has been engaged in negotiations with its landlords for rent abatements, deferrals and other modifications, it has received notices of default from the landlords of 49 of its retail locations. While no termination notices have been received, the cure periods of the defaults have generally expired.

At the time of the bankruptcy filing, It’Sugar has approximately $0.5 million of cash, $6.2 million of secured debt, and $10.4 million of unsecured liabilities, including unpaid rent obligations.